Despite Team Loyalty, We Can All Learn From Derek Jeter

I met Derek Jeter in the summer of 1998. To say I was overwhelmed would be an understatement: it was my first day of my first trip to New York City ever – my family hadn’t been in Manhattan all of five hours. Mom overheard two workers at Niketown chatting about how tall the Yankees shortstop was. Within minutes, I saw for myself, standing literally right next to him. 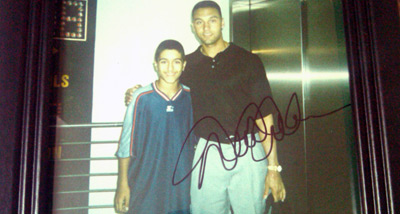 Most of my five minute chat with Jeter consisted of me nervously rambling: he scored the game-winning run the night before, I had tickets to the next three Yankees games, I traveled from Niagara Falls, NY just to see him play, this was my first visit to Yankee Stadium… yada, yada, yada. The Yankee stood there and listened as if I was his little cousin – nodding and thanking me for my support while a customer service rep prepared his merchandise.

Jeter didn’t have to give me 10 seconds of his day for me to think of him as my favorite baseball player. But he did, and for what it’s worth, he’s enshrined with that title the same way he will be enshrined in Cooperstown once he retires – unequivocally and forever.

As I’ve grown older – I’ve only come to appreciate the captain more. But I’m no more grateful for his hits, runs, off-the-back-leg throws, or championship rings as I am for the class and grace he exhibits while doing so.

The bottom line: he always says the right thing and never does the wrong one. Jeter has found a way to the top of baseball without taking a path through steroids and/or tabloids.

At the time I met Jeter, he was 24. Now he’s 36, and still playing (for now) the most youth-oriented position on the field: shortstop. Despite his success and the way which he achieved it, the Yankees felt the need to negotiate Jeter’s contract this past offseason through the media, as if the five-time World Champion was an ungrateful, undeserving athlete. You think New York’s front office would have dealt with enough of those types to distinguish them from the rest, but apparently not. Regardless, Jeter kept his silence and signed a new deal – and only said of the process that he wished it wasn’t as public as it had become.

Yet now, despite coming off a Gold Glove season, partly because of his age, and mostly because of the Yankees brass, Jeter will be faced with a plethora of carefully-worded questions about not only his future in pinstripes, but his future position while in them. Those inquiries kicked off with his arrival to Spring Training, and in typical Jeter fashion, he responded.
—

—
“I don’t think you prepare yourself for a negative,” Jeter responded to a question about a decline in the lineup order or playing time – plus possibly changing positions. “If you get in to a situation where you have to address that, then you address it. Right now, my mindset isn’t on, ‘Well, what’s going to happen if I’m not doing my job?’ I think that’s pretty difficult to do.”

I’m sure some feel it’s still easier for Jeter to stay positive than most given his job, bank account, and relationship status. But if doing the right thing, all the time, with relative ease was so easy – then why don’t more professional athletes do it?

Perhaps those other athletes are all too busy preparing for the negative.