Inside the ring, opponents knew Randy Poffo as “Macho Man” Randy Savage, a fierce competitor who could drop a devastating elbow from the top rope. Outside the ring, fans came to know Poffo to be just as “macho” – but not for the reasons you might think.

I had the pleasure of meeting Savage on a couple of occasions. The first instance happened so long ago, that I can barely remember all of the specifics. Here’s what I can scratch out: I was three or four years old at the time. My father, Ralph Sr., was serving his first of two terms as a City Councilman in Niagara Falls, NY, where I grew up. The WWE frequently performed both televised and non-televised events at the old Niagara Falls Civic and Convention Center. At the time, I was obsessed with all things Teenage Mutant Ninja Turtles (bet you couldn’t guess who my favorite was), New York Yankees, and WWE. So, my dad took me to the matches – my first of many shows. We had great seats for the evening – and I watched with excitement during the main event as “Macho Man” Randy Savage beat “The Million Dollar Man” Ted Dibiase.

After the ring had cleared and spectators began exiting, I remember my father bringing me backstage. We walked down a long hallway where a number of WWE officials and a few paramedics were following Dibiase to the dressing room. I’m pretty sure I was trying to yell something at Dibiase, and my father was telling me to zip it or else “The Million Dollar Man” would come over and beat me up. That doesn’t sound too far-fetched, especially if you know Ralph Sr. I also vaguely remember my dad stopping a couple of times to chat with some of the city workers he knew who were at the event.

However, as I would come to find out before the end of the evening, the whole reason my dad brought me back there in the first place was to meet “Macho Man.” A WWE official had told my father that Savage was on his way out of the venue. We quickly walked to the main exit where Savage and “Miss Elizabeth” were in the back of a black limousine that was getting ready to depart.

Now, I don’t remember exactly how this went down because we’re talking like, 1989 here. But my dad and I walked over to the back, driver’s side of the limo so Savage could see us. I was waving at the limo, and I’m almost positive my dad was gesturing for the wrestler to come out of the limo so that I could meet him. Next thing I know, the door opens, the “Macho Man” steps out, hoists me up, and all I see is a flash. 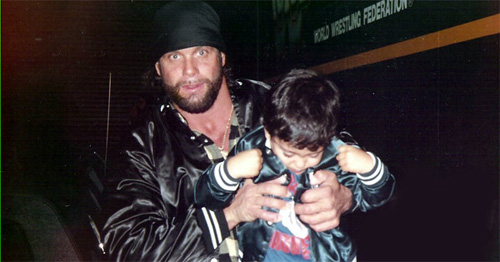 I can specifically recall my dad yelling, “Ralphie, smile! Lift up your face!” But clearly, I look petrified. If anything, you now know that my ability to act cool around celebrities wasn’t a natural gift by any stretch of the imagination.

Randy Poffo died Friday at age 58. While many will memorialize Savage for his great matches in the ring and over-the-top Slim Jim commercials – I’ll remember the “Macho Man” for something far less “macho” – but just as telling of the type of man he was.