Click below for an audio montage from my 15 hour air shift which began on Thursday, September 8 at 2 pm.

On Monday, I thought my week would become difficult after my car hydroplaned on Interstate 80 across three lanes and took out a light pole. I walked away relatively unscathed.

Unfortunately for myself, and many others throughout Northeastern Pennsylvania, I had no idea what Mother Nature had in store.

The rain and residual water from the week brought the Susquehanna River in Wilkes-Barre to its highest point in history, a staggering 42.66 feet at 3 am on Friday morning. The number surpassed that of the historical Hurricane Agnes flood, a disaster that washed away downtown Wilkes-Barre, Kingston, Forty Fort, and other surrounding areas. Agnes, a name that still elicits anxiety to many life-long residents, raised the river to 40.9 feet. 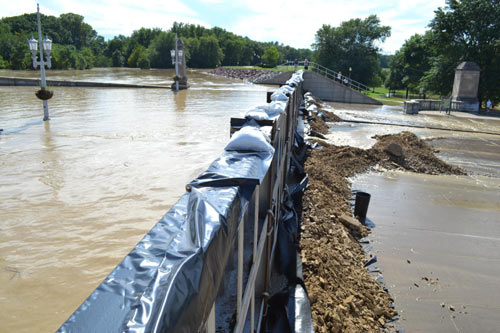 Like in 1972, some find themselves entering a rebuilding stage. Parts of NEPA not protected by the levee, including sections of Edwardsville, West Pittston, and Shickshinny, are on the road to recovery.

Miraculously, it is business as normal in sections of the area, including downtown Wilkes-Barre, that were behind the 41 foot levee. According to the Army Corps of Engineers and the Luzerne County Emergency Management Agency, the levee worked even better than designed. Save a few minor leaks, it held, and saved the county millions of dollars in damage.

I awoke on Thursday morning a little later than expected (I know, surprise) and headed off to physical therapy for an unrelated injury. En route, I received a call from A.J. at 97 BHT. Downtown Wilkes-Barre was to evacuate by 4 pm, and not plan to return home for 72 hours.

Quickly, I pulled a U-turn, showered, packed four days of clothes, food, and technology in to three bags, and headed off to work in my rental car. I signed on-air at 2 pm. I updated Facebook and searched Twitter. A.J., along with WBRE’s Dave Kuharchik and Andrew Seaman, a freelance reporter working for USA Today, all contributed to the coverage.

When I left the airwaves at 5 am on Friday morning, giving way for Kidd Kraddick, I wasn’t as tired as I initially thought. Eventually around 6 am or so, I settled back in to the passenger seat of my rental, a Chevrolet HHR, and passed out. I awoke at 11 am, drove immediately to Starbucks, and returned to the radio station for my show at 2 pm.

Friday’s show wasn’t as fast as Thursday’s – there were no breaking developments by the minute. Instead, we sat and tensely watched the river, the broken gauges, and the almost-flawless levee system. “Crest,” “gasket,” and “recede” were words that Northeastern Pennsylvanians threw around as freely as “haluski” and “pierogies.”

Thankfully, the story in Wilkes-Barre ended on a positive note. The levees held, and the evacuation was lifted Saturday afternoon. I returned to my apartment Saturday evening.

The power was on. The water was clean. I walked in relatively unscathed.