Coverage From The Blue Carpet of The 2013 Billboard Music Awards

When it comes to Justin Bieber, Taylor Swift simply “ain’t got time for that.”

“Can we have another question?” Swift responded when asked about Justin Bieber receiving Billboard’s ill-titled “Milestone Award” on Sunday night at the 2013 Billboard Music Awards. Swift answered a couple of questions from the media in the press room after the night ended. That of course, was not one of them. 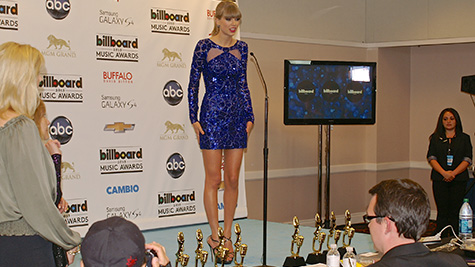 Immediately I flashed back to the program and thought I knew why Taylor decided to dodge the question. Selena Gomez introduced Swifts’ performance of “22,” and the best friends sat next to each other all night. Of course, Gomez and Bieber recently broke up, again, for good… we think (hope?).

Then I flashed back to Saturday, backstage at the BBMA. Ed Sheeran, T-Swift’s current tour-mate on the “Red” tour, told me that Swift wanted to win the “Milestone Award” the most because it was a fan vote. You’ll hear my full interview with Ed later this week on “The Ralphie Show.”

But is Taylor’s snub of the Biebs simply award show sour grapes? She’s had her fair share of interesting moments at these events, but let’s not forget Swift was the big winner on Sunday night. The songstress took home eight awards, including Top Artist and Top Billboard 200 Album.

I still believe it’s the former: Taylor was not about to pay props to a kid that wronged her best friend. Regardless of how she answered, she would have made even more headlines than she did with her non-answer. Perhaps the T-Swift media machine wins yet again.