My Chance Encounter In Central Park With Coldplay’s Chris Martin

I’ve ran in Central Park for almost three years now. I love running; it’s one of the few things I do that improves every aspect of my life: physical, professional, psychological.

Despite my frequent runs not just in the park, but around the famed Reservoir, I’ve never seen a celebrity. That changed on Friday, when I ran in to not just any public figure, but the lead singer of my all-time favorite band.

Of course, I almost didn’t go for a run Friday afternoon. About two weeks ago I hurt my knees, again. The initial injury occurred in 2011. I suffered “dashboard knee” and ended up in rehab for a few weeks and on the sidelines for almost 10 months. Plainly, it sucked. I’ve spent the time since building strength in the knees and the muscles that surround them, and things were pretty solid until my latest mishap; I lost my footing while stepping around an open door to get in a cab and both knees smacked against the sidewalk. It was as painful as it sounds.

After about two weeks of going easy, taking the occasional Advil and icing my knees, I felt I was ready to test the waters. I went through my normal stretch routine, grabbed my Bluetooth earbuds and iPod Nano and headed out in to the concrete jungle. I decided that I would lightly jog my normal three-mile route, which takes me in to the park and around the shorter Bridle Path that circles the Reservoir.

About six minutes in, my run was going about as well as expected when I made it on to the path. I always travel on the path counter-clockwise; technically that’s the way you’re supposed to run or walk but if you’ve been you know that maybe half of the people actually pay attention. Anyways, I don’t think I was circling the Reservoir more than five minutes when two people, one who I definitely recognized, were walking in the opposite direction. 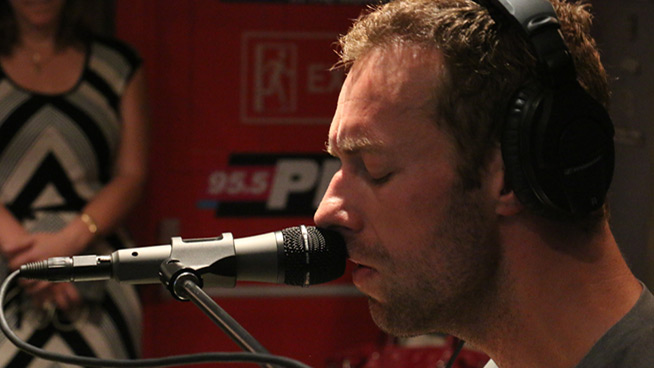 The guy was wearing a white shirt and a black hat somewhat pulled down low. I recognized his face immediately though. I just jogged by Coldplay lead singer Chris Martin.

At this point I have a quick decision to make: do I keep going in the opposite direction or go over to him just to tell him what a big fan I am? First, I look to see if a lot of people are around. I want to respect the man’s space and do not want to cause a scene. But our stretch of the path is rather desolate. It is as this moment I decide that if I don’t approach him, I’ll be second-guessing myself for a while. So, I remove one of my earbuds, pull a U-turn and head in Martin’s direction.

Again, my plan is to be inconspicuous and not make a big scene. So I gently run up behind Martin and the person he’s with, and then duck to Chris’s right side.

Well, I was a bit too inconspicuous and scared the bejesus out of the person he was with.

Martin, realizing I meant no harm and posed no threat, immediately thanked me for my support and high-fived me. Yes, high-fived me. I think he was trying to smooth over what had become an unnecessarily-awkward situation, because he thanked me for being a fan of the band’s about three more times in the 10 seconds that passed before we parted ways.

And as his friend did their best to get their bearings back, a security guard (who came out of nowhere!) was hot on my tail.

I waved goodbye and completed my normal three-mile route, albeit a little quicker than I had initially planned to thanks to an added dose of adrenaline.

I’m already getting asked this question a lot so let me answer it now: I think I know who he was with but I’m not speculating or confirming any names. I was going for a run, he was enjoying a Friday afternoon in the park. We can leave it at that.

When I got home – three thoughts surrounding the chance encounter prevailed: I really hope no paparazzi caught that, boy do I have a great story to one day start off a Chris Martin interview with and most importantly, I wish I would’ve acted a little cooler (although for the record, I never really lost my cool per se, but whatever).

However above all else, the running itself was a success as thankfully my knees are not sore at all.