“Locked Away,” the Caribbean-infused pop song with a catchy chorus sung by Adam Levine, could have been the song of the summer. Matter-of-fact, the duo that comprises R. City intended for the track to be just that. However Timothy and Theron Thomas were not able to release to the track to the masses until July; despite the fact that it was ready in May.

“We got Adam Levine on the song, and then just clearing it with his label and the time that it takes to get that process done took a little longer than we had expected,” Theron revealed to me. “We were so ready to get it out.”

Levine recorded his vocals at the beginning of May, and the Atlanta-based group planned on a June release. However at least one lesson was learned: once you’re on a major record label, you will not always have full control over a project’s timeline.

“As songwriters and producers, we come in, we write the song and then we leave,” Theron explained. “We’ve always been independent, and we’re really famous in the Virgin Islands, so we used to put out independent albums put out music on our own.

“When you’re signed to a label, you can’t do ‘guerilla-style’ stuff. People have to sign waivers and stuff has to be cleared.” 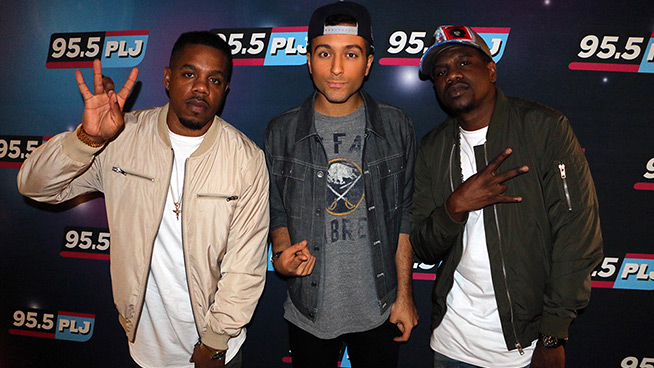 But on the flip-side it was the label, Dr. Luke’s RCA imprint Kemosabe Records, that enabled the Levine collaboration in the first place. Luke, nee Lukasz Gottwald, played the track for the Maroon 5 front man and he immediately agreed to sing its hook.

The whole project is quite improbable considering that when R. City first entered the studio with Luke, the goal was to write hit pop songs; “Katy Perry records.” Gottwald had already seen the duo’s talent first-hand as they collaborated on Becky G’s single, “Shower.” A mutual friend tipped Luke off to the Thomas brothers’ talents as singers. Any aspirations that they, or their manager had for a Perry placement quickly vanished.

You can only imagine the expression on the face of Ray Daniels, R. City’s manager, when Dr. Luke told him he had R. City records to play him instead of other collaborations; the artists weren’t even signed, although that too was about to change.

“He started to get a lot more cool about it once he heard the music,” Timothy said.

“Luke started playing him records and (Daniels) was like, ‘Okay, cool, I get it,’” recalled Theron.

And it all worked out the way it was supposed to: “Locked Away” hit number one on the pop radio airplay chart on the same week that the duo’s debut album, What Dreams Are Made Of, hit shelves.