INTERVIEW: Here’s How Pentatonix Brought The Star Wars Craze To The AMAs

The return of Star Wars to the big screen has sent fans in to a frenzy. Die-hards are signing up for light saber exercise classes, purchasing Star Wars-themed ice cream and inspiring “SNL” skits.

It seems the influence and reach of “The Force Awakens” knows no boundaries, thus it made sense that at last month’s “American Music Awards,” there would be a tribute to the movie’s original score. The music, created by distinguished composer John Williams, was adapted to the AMA stage by acapella group Pentatonix. It was a task that the quintet did not take lightly. 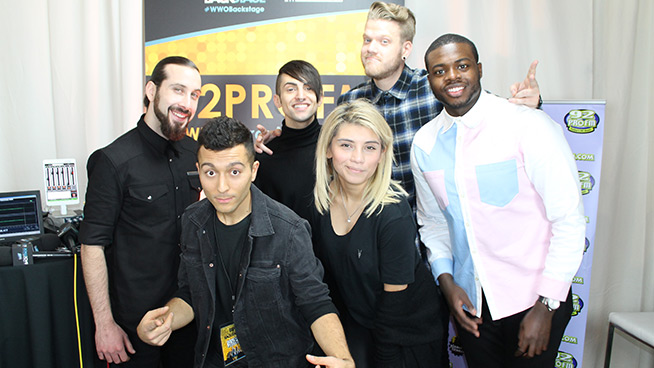 “That was the tough part about it. (The music) is all instrumentals, and all the melodies, chords and rhythm stuff are very instrumental,” explained vocalist Avi Kaplan when I spoke with the group a few days before the award show. “So making them vocal was a really tough thing. There are no lyrics. It’s very choral and operatic.”

“Figuring out what sounds good (was tough) too… we have to change things around,” added group member Scott Hoying. “It’s just kind of crazy.”

Most musicians would agree that it is a little unnerving to have to alter an iconic theme like the “Imperial March,” and then perform it on national TV. But the 2011 winners of NBC’s show “The Sing-Off” approached the performance with a very specific goal.

“We just wanted to keep the essence of Star Wars and make sure it was dope,” Hoying said. “We didn’t want to try and make it about us at all.”

Yet if there was one person who wouldn’t have minded the piece centering on the acapella group, it was Han Solo himself. Just ahead of the show’s start, TMZ broke the story that Harrison Ford counted himself as a big fan of Pentatonix, and was tabbed by dick clark productions to introduce the performance during the broadcast on ABC.

After Ford’s intro, the quintet took center stage inside Microsoft Theater and ran through a 3 minute-plus medley; about a minute-and-a-half in, a full symphony orchestra joined Penatonix on stage and ushered in the movie’s main theme.

In the press room, it almost seemed as if everyone stopped what they were doing to find a TV monitor and catch the performance. All four members of Fall Out Boy, who were making the media rounds following the band’s AMA win, took a break from interviews to watch the segment with us. No one really spoke; we were all kind of transfixed to what was unfolding on the show.

And when the final note was sung, the entire audience rose to offer both Pentatonix and the orchestra a standing ovation. As the acapella group has proven so many times on live TV, with them, the force is strong.