The Worst Travel Experience I’ve Ever Had

Are you looking for photos from my trip to the Domincan Republic? Here’s the only one you’ll find. I’m actually supposed to be there right now. But to say that I’m relieved to be safe, home and on the radio tonight would be an understatement. 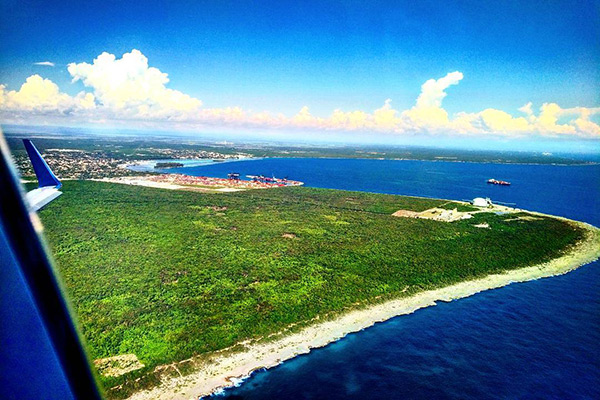 Yesterday I boarded a Delta flight headed from JFK Airport to Santo Domingo in the DR. There, I was set to cover this weekend’s David Ortiz Foundation Celebrity Golf Tournament.

I want to stop here for a second and thank the foundation for inviting me down to cover the event, in addition to all it is doing for kids throughout both New England and the Dominican. I hope the benefit goes off without a hitch and of course, nothing I’m about to state is reflective on them.

As the airplane began its descent in to Santo Domingo, attendants began handing out the necessary forms for Customs. I slept most of the flight but awoke to receive my paper work and fill it out.

I got to “Passport No.” and obviously didn’t have it memorized, so I reached to grab it out of my pocket.

Maybe it dropped on the floor? Perhaps I put it in the front seat pocket? Did I stuff it in my bookbag? Is it under the seat or stuck in a crevice?

I spent the next 20 minutes along with the entire de-boarding process unsuccessfully attempting to answer the most-pressing question: Where the heck is my passport? Obviously you must show it to board an international flight, so obviously I brought it with me on to the plane.

Eventually everyone exited and the flight attendants assisted me in the search, to no avail. I was then told that I too must exit, but that the cleaning crew would go through the plane and probably find my passport. They didn’t.

I stood on the end of the jet bridge speaking with the one English-speaking Delta employee at the gate. Welcoming, warm and pleasant she was not. Concerned that I had just landed and couldn’t find my passport? She certainly didn’t seem it. Instead, she insisted that I search my bookbag and luggage, all while hovering over me. I obliged and for about the sixth time in the past 45 minutes, dumped my bookbag out only to not find it.

Was there a chance I could call the U.S. Embassy (it was during normal business hours) or was there anything Customs in the Dominican Republic could do? Apparently not, and if there was, she wasn’t interested in finding out. As soon as she saw that I couldn’t produce a passport, the Delta employee returned to the gate, printed me a new ticket and instructed me to re-board the plane I had just exited. The aircraft was heading back to JFK.

My experience was disturbing, disheartening and humbling. I don’t travel internationally often and certainly was never in a situation prior to yesterday where I was in a foreign country, unable to speak their native language and without proper documentation.

I returned to New York and after navigating through more confusion from Delta and Immigration employees, ended up speaking with a U.S. Customs Officer. The Customs Officers and the Port Authority Police were fantastic. They quickly assisted me in entering the U.S. and filing a report for my stolen passport. The previous document is now invalid and at some point, I will have to reapply as a new passport holder.

But even the Port Authority Police Officers wondered why no one in Santo Domingo offered to put me in touch with the U.S. Embassy, or at the very least, direct me to contact them?

Following an Uber ride back to my apartment, I asked that very question along with a number of others to a supervisor on Delta’s elite member customer service line. According to the person on the phone, the Delta Employee in Santo Domingo didn’t have to help me because “that’s not her job.” As for her callousness, that was explained away as simply, “cultural differences.”

I guess even though Delta operates internationally, the same standard of customer service doesn’t apply to their employees everywhere.

Overall, I was told the incident was my fault and mine alone, so Delta was not responsible for anything – from the missed opportunity to the missing (stolen) passport to ticket price to the overall wonderful experience that was my Thursday.

Now for the record, I’m a Gold Medallion member with the airline but frankly, that shouldn’t matter; every customer should be treated with respect.

And frankly, my “status” didn’t matter. It left me wondering: Is every customer treated with such little compassion?

I hope that you never have to find out.