The latest chapter in the bizarre um… narrative… that is the Taylor Swift/Kanye West feud played out through a reality TV show and social networks on Sunday night.

And as we’ve learned through both a magazine interview and TMZ report: lawyers on at least one side of the debacle are now involved.

Back in February, Kanye West released the song “Famous” from his album, “The Life Of Pablo.” In it he raps, “For all my Southside n—-s that know me best I feel like me and Taylor might still have sex. Why? I made that b—h famous.”

Through a representative, Swift refuted West’s claim that he had received approval from the “Shake It Off” singer for the song. She took things a step further during her GRAMMY Acceptance Speech for “Album Of The Year.”

“I want to say to all the young woman out there: There will be people along the way who will try to undercut your success or take credit for your accomplishments, your fame,” she said. “But if you just focus on the work and you don’t let those people sidetrack you, someday when you get to where you’re going, you’ll look around and you will know it was you and that will be the greatest feeling in the world.”

You could say Swift sang a much different tune in newly released footage, which Kim Kardashian West uploaded to Snapchat on Sunday night, following the conclusion of “Keeping Up The The Kardashians.” The video shows Kanye talking with Swift on speakerphone. West recites the lyric of them having sex.

“I’m like this close to overexposure,” Swift replies. In a way this line provides a peak behind the curtain of fame and perhaps offers the most telling point of their conversation: Swift’s initial concern centered on coverage, not vulgarity. 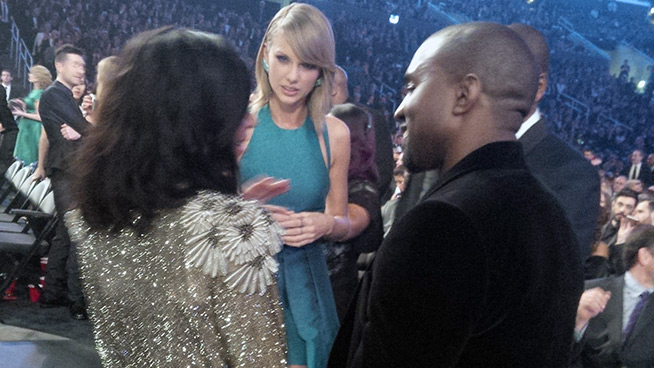 “I mean it’s like a compliment kind of,” she adds when West retorts that this mention would be “a cool thing to have.” “TLOP” was certainly a special album for West in that he decided to premiere it during his fashion show at Madison Square Garden, exclusively stream it on Tidal and then continuously change and alter the tracks to his liking even after the LP’s release.

“I mean, go with whatever line you think is better,” Swift tells him. “It’s obviously very tongue in cheek either way. And I really appreciate you telling me about it, that’s really nice!”

The video demonstrates that West not only went out of his way to seek Swift’s approval but even offered an alternative to the line. You could probably not say the same for the thinly-veiled and not-so-thinly-veiled songs Swift has written that were allegedly about others over the years.

At no point during the uploaded portion of the conversation did West run the b-word by Swift, which she touched on when responding to the video.

“You don’t get to control someone’s emotional response to being called ‘that b—h’ in front of the entire world,” she stated in an Instagram post. “Of course I wanted to like the song…being falsely painted as a liar when I was never given the full story or played any part of the song is character assassination.

“I would very much like to be excluded from this narrative, one that I have never asked to be a part of, since 2009.”

Kardashian West revealed to GQ that Swift’s lawyers already fired off what amounted to a cease-and-desist letter. TMZ reports that the call was recorded in California, which would determine what if any legal recourse Swift could take regarding the recording.

Bottom line: the narrative is far from its conclusion.