Former Atlantic Records artist Gia Farrell won a Golden Ticket to Hollywood during the Portland, OR auditions for “American Idol” this season. Although Gia did not make it to the live show, she did get to meet and interact with some of the finalists who did. 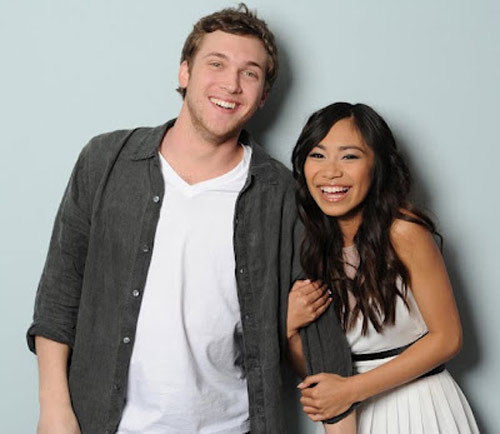 Farrell talked about her experience and who she thinks could win “Idol” on “The Ralphie Radio Show.”

AUDIO: Gia Farrell Explains How She Got Her Golden Ticket on ‘Idol’

Major record label deal, radio promo, hit single… Gia Farrell has been there and done that. Yet apparently her experience as an Atlantic Records artist, which lasted over a year and ended in December 2007, left her yearning for more. So off she went… to audition for “American Idol.” The New York native received a golden ticket to Hollywood in Wednesday night’s episode from Portland, OR.

“I’m not allowed to talk about it specifically,” Farrell, born Jeannie Bocchicchio, told me on “The Ralphie Radio Show” Thursday. “But I did get through the judges and they do show me celebrating with my golden ticket on TV.”

Farrell spent two months auditioning for producers, executive producers, and then the big three. While Steven Tyler, Jennifer Lopez, and Randy Jackson offered up compliments and a pass to the next round, it did not come without criticism.

“I went in singing a song called, ‘I’m Going Down’ (by) Mary J. Blige,” Farrell recalled. “They thought I should be doing a little more pop-y, rather than an R&B/pop kind of a thing.”

The singer chose an R&B track because that is what catapulted her music career in the first place. When Farrell was 16, she landed a deal with Atlantic Records off of an audition where she belted out “How Can I Ease the Pain?” by Lisa Fisher. Radio promotion followed in support of her single, “Hit Me Up,” which was featured on the official soundtrack for the movie Happy Feet. By December 2007, Atlantic dropped Farrell. But, in an ironic twist, “Idol” producers chose “Hit Me Up” for Syesha Mercado, who placed in the top 3 during season seven.

As for Farrell – she wouldn’t divulge what went down during Hollywood week, but I’d have to imagine that if she allowed herself on to my show, she didn’t make it. As long as you’re still competing on the show, producers prohibit you from partaking in interviews or any other media.