I just realized that this post isn’t as super-belated as I initially though; I ate birthday cake about a week ago.

My actual birthday was on June 6 and regardless of my Mom celebrating in late fashion with both my sister (June 14) and Uncle Dave (this past Wednesday), I still felt compelled to at some point write a “thank you” for everyone who both sent their well-wishes and/or joined in on the fun in person.

So I turned 21… on June 6, 2006. I was still attending Syracuse University that summer and working in the city. My cousin and best friend Anthony (who ties the knot next weekend) was in law school at St. John’s. My Dad and my buddy Vinnie drove from Niagara Falls to Syracuse, where on midnight we threw back a few celebratory shots at Chuck’s (hashtag never forget). You should’ve seen the bartender’s face when she realized that for the past year that she had served me, I wasn’t of age. Whoops!

The next day we drove to Bayside, met up with Anthony and headed over to the Bronx. The Yankees beat the Red Sox 2-1 thanks in part to Melky Cabrera robbing Manny Ramirez of a home-run.

Now 11 years later, the Yankees were in the Bronx, playing the Red Sox. A friend-of-the-show, Eric, has season tickets and invited me to go to the game with him. Of course I obliged, and despite a much different outcome, was happy that I spent at least part of my birthday at the Stadium.

The celebrations continued Saturday, where I headed back to the Stadium with my friend Riana, John Foxx and his better half. The outcome was much more favorable as the Yankees went home-run derby on the Orioles. I watched the last few innings back in my neighborhood, chowing down on hibachi with my friends Ryan and Gina.

With me in town the weekend after my sister’s birthday for my cousin Anthony’s stag, my Mom thought it would be a nice idea to have a little cake that celebrated quite a bit, none-the-more-evident than by simply looking at it. 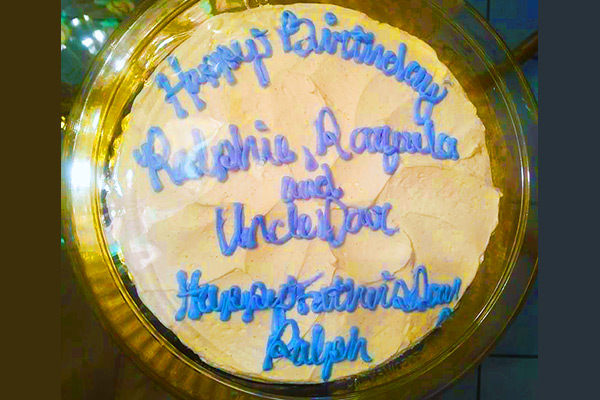