Collaborations, cameos and covers are three ways in which Nelly has surprisingly yet seamlessly crossed genres from hip-hop to country. However his latest move, a cover of Thomas Rhett’s hit, “Die A Happy Man” may just be the biggest surprise to everyone, including Rhett, yet.

“It was crazy, man,” Rhett described of not just the new rendition, but of the whole experience with the single. “Just to have a song that was so personal to me and to my marriage, and to have it on the radio and be so successful, and then kind of organically cross over (to other radio formats) I think was the coolest way it could have ever happened.”

“Crazy” is one way to describe it but “unprecedented” might be a more accurate summation. “Die A Happy Man” spent an unheard-of six consecutive weeks atop the country radio airplay chart. The last track to accomplish that feat was Taylor Swift’s “Our Song,” which held the number one spot from December of 2007 through January of the following year. 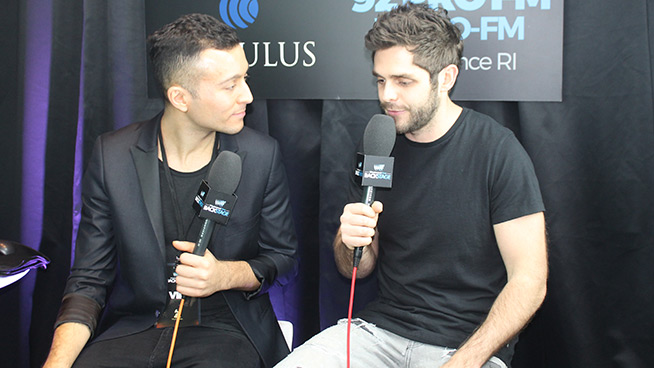 A country male solo artist hadn’t spent five weeks on top of the airplay chart since Kenny Chesney in August of 2007. Not only did Rhett surpass that reign, but “Man” also ruled the airplay chart, Billboard’s Hot Country Songs and the Country Digital Songs tally simultaneously… for three straight weeks.

And then, Nelly decided to put his spin on it. I asked Rhett how the track clicked with the St. Louis emcee.

“I have no idea,” he replied. “We did talk on the phone the other day, and I’ve been a huge fan of Nelly for my entire life.

“He was just like, ‘Man, if you know me, you know that I love great songs and that I’m a songwriter and the first time I heard this song, I just felt your emotion and I wanted to put my voice on it and make a different track.’”

Rhett didn’t mention a possible remix but if the two artists do attempt to link up for a remix, it might have to be remotely. The Georgia-born singer just wrapped a country music festival in London with Miranda Lambert and following a few one-off dates in April will pick back up with Jason Aldean’s tour this May. The trek, which officially started in Illinois last January, wraps in Virginia on October 1.

So what’s more nerve-wracking: Reading off a teleprompter in front of a national TV audience, or performing a song in front of the same audience? If you answered the former, then you have something in common with Florida Georgia Line.

“I’d rather play a whole show and I’d be less nervous than getting up there and trying to read,” singer Tyler Hubbard told “The Ralphie Show” ahead of this weekend’s American Music Awards. Last year the duo presented an award; this time the group has four nominations and will perform. “It’s just a whole another ball game for me at least but we got through it.”

Florida Georgia Line is up for Best New Artist, Single Of The Year, Favorite Country Band, Duo or Group, and Favorite Country Album. Of course the band’s big 2013 was fueled by the hit “Cruise,” with a crossover-friendly remix featuring rapper Nelly.

“We grew up listening to him,” Brian Kelley said of the “Country Grammer” star. “When we got the mix back, I still think about it. I’ll never forget the day we got it back. We were on the bus, and we listened to it probably a hundred times.”

Hubbard noted that Nelly proved to be more than just a solid musical collaborator.

“He gives us all kinds of advice. He’s a smart, smart guy,” Tyler said. “One thing that we definitely took from the beginning was, he’s just big on, yunno everything is just happening so fast for us and he’s just like, ‘Man, you can only be the new guys once. So just enjoy it, live it up, and keep working hard.’”

FGL will round out the year with a performance at the Macy’s Thanksgiving Day Parade and some December commitments before calling it a year on December 16. Suffice to say the southern boys haven’t quite acclimated to the northern weather yet.

“We’ll be back in New York, trying to stay warm,” Hubbard said. “I need to find me a scarf.”

“You probably won’t recognize us on the float,” added Kelley. “The only thing that’s going to be showing is our eyes and maybe our nose. We will be bundled up.”

Florida Georgia Line already scored a huge hit among country music fans with this track – now the band hopes to bring it to the masses and possibly introduce us to a summer anthem with the remix that features Nelly.

Been a minute since we’ve heard from Nelly; “Just a Dream” came out back in July of 2010! This looks to be the first big single from his forthcoming seventh studio album.

The song was produced by DJ Frank E, who if you couldn’t tell, also produced this song…