This story begins the way most good ones do: with a bottomless brunch.

My buddy Danny and I were down in the West Village partaking two weekends ago on a Saturday. I opted for the meatless version of Benedict: Eggs Florentine. I think he went with waffles or French Toast. Regardless, the dishes and the Bloody Mary drinks were both plentiful and delicious.

It was uncharacteristically warm on this late-January afternoon (what else is new this season, right?) and so we decided to walk over to Soho and check out some shops. I went with no intention to buy anything, which is akin to entering a Target with only one item to purchase or heading to the grocery store on an empty stomach.

Naturally, we made our way over to John Varvatos’ flagship store at 315 Bowery; the old CBGB’s, an iconic punk rock venue. There was an end-of-season sale happening and given that The GRAMMYs were right around the corner, I thought it would be a good idea to peruse the racks. Stephanie, my stylist, was working in-store and helped me find a couple of items before showing me to a dressing room.

Before we checked out (but I had no intention of buying anything!) Stephanie asked if I was invited to Varvatos’ New York Fashion Week event that Wednesday. I had not (yet) and so she forwarded me the e-vite. The showcase took place from 6 to 8 p.m., meaning that if I timed it correctly I could stop by just before signing on to the radio for my show.

JV was displaying his Fall/Winter 2016 collection and decided to do so in an unconventional way, ditching the runway to instead turn 315 Bowery in to a fun-house of sorts. When I returned to the store Wednesday, I was greeted by a completely redesigned space: gone were any signs of a retail shop, replaced curtained off rooms that had unique soundtracks, both live models and mannequins as well as copious amounts of imagery surrounding the collection’s theme: “Rock Is Dead. Long Live Rock.”

When you first walked in to the building, entering not from Bowery but instead the entrance off 1st Street, you were greeted with coffins and memorials to musicians who were killed by “Pop and EDM music,” “the record industry” and “the political system.” 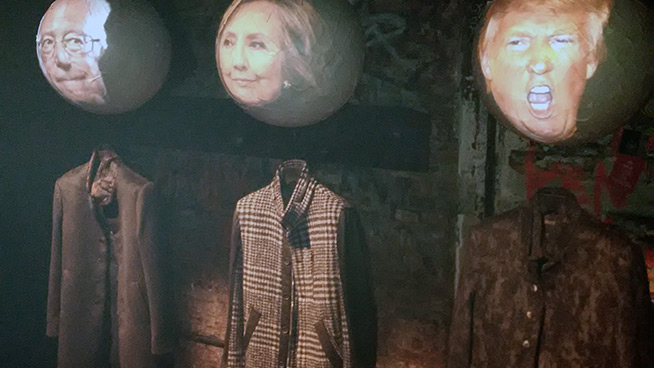 And then the aforementioned political system was visualized: mannequins wearing suits with the faces of either one of the 3 Stooges, Donald Trump, Bernie Sanders or Hillary Clinton projected on to the heads. The Rolling Stones blared over the speakers as some of JV’s new pieces were worn by models, all of whom covered their faces with masks. Other items were framed and mounted to the wall.

As you turned to yet another room, rock began to gain life again. The Who’s “Another Brick in the Wall, Pt. 2” screamed over onlookers Snapchatting and Instagramming the event. Varvatos printed the refrain “We Don’t Need No Thought Control” over a wall of bottom-only mannequins, leg crossed, modeling JV jeans.

Varvatos himself greeted those who came out to the show before you entered the final room: lit in bright white, with what I believe was the only live model sans mask.

It was great to see John and experience a rare fashion week event, especially one clearly cut from a different cloth. That bottomless brunch wasn’t too bad, either.