Archives For Play That Song Tour

Back in February, while talking about baseball, Train lead singer Pat Monahan told me he was done singing the National Anthem at sporting events because of how stressful it is.

You could imagine my surprise when I saw Monahan on national television belting out the anthem, a cappella, before Game 1 of the NBA Finals.

“I don’t think I’ve ever been as nervous as that one, and I sang at the AFC Championship game two years ago in New England,” Monahan said after I played him the clip of us speaking earlier this year. “That was stressful, but nothing like Game 1 in Oakland.

The singer explained why the moment is filled with so much pressure.

“There’s a thing that happens, up until, ‘and the rockets’ red glare,’ all the way up until then, there’s a vast chance of you forgetting all of the words that would just disappear,” he said. “I don’t know why, but I’m so scared for that 48 seconds that it takes years off of my life.” 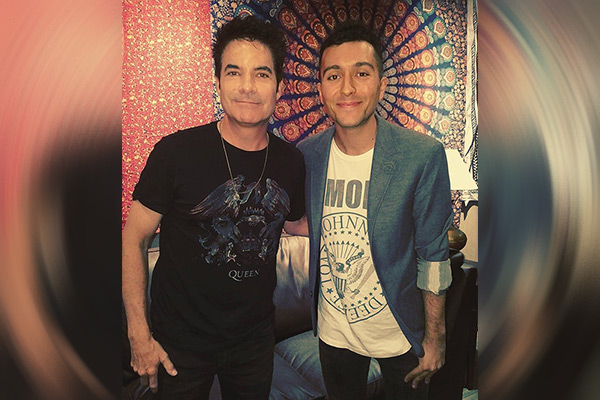 Monahan agreed to sing the anthem at the urging of his manager. With connections in the Bay Area along with Seattle and Western Pennsylvania, the front man has a number of rooting interests in sports, including the Golden State Warriors.

When I caught up with Pat, it was in a much-more relaxed setting. He and I chatted backstage before the band headlined Mohegan Sun Arena in Connecticut. Our interview was for Mohegan Sun’s Facebook page and broadcasted live on it as we talked in Monahan’s dressing room.

“There are songs that we play every night that I had no idea that they would get the reaction that they’re getting,” the lead singer told me. “There’s a song called “Working Girl” and it goes pretty bananas out there every night.”

Monahan is mixing in the newest from the band’s “A Girl, a Bottle, a Boat” with the classics as well; one in the latter category is his favorite to perform every night.

“’Drops of Jupiter’ will always be the song that has heart for me,” he said in response to a fan question about his favorites on the set list. “Play That Song,” Train’s lead single from its latest LP, also received an honorable mention.

As far as other set list specifics, the band switches out two songs every night. They also pay tribute to Chris Cornell and Gregg Allman, neither of whom had passed away before the “Play That Song Tour” commenced.

The tour, which features support from Natasha Bedingfield and O.A.R., runs through mid-July before Train takes off for the “Fuji Rock Festival” in Niigata, Japan.