PHOTOS: Todd And Jayde Talked About My Fingers For Five Minutes

I still can’t believe they spent five-and-a-half minutes in the middle of a four-hour radio show talking about my two fingers.

Okay, let me backup and explain.

Monday night I was searching through photos on my BlackBerry (go ahead, roll your eyes) and I came across this shot I took of the skyline when I was driving over the RFK Bridge Sunday. I had landed earlier at JFK from my weekend trip to Denver and was riding in a car back to Manhattan with a few friends. 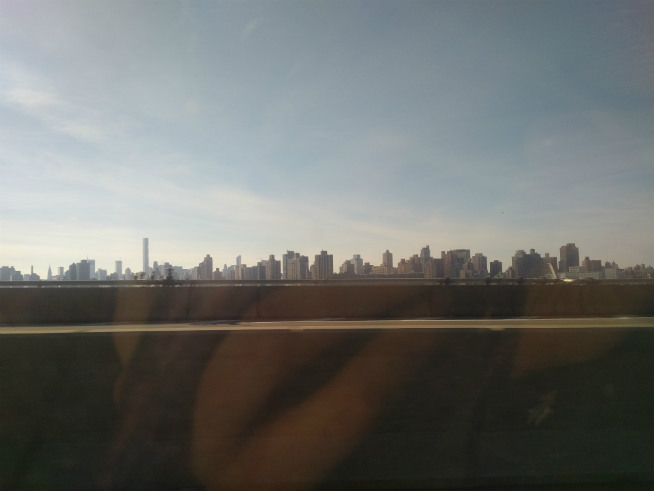 I thought the photo might work well on the radio station’s Instagram and so I loaded it in to the app and started messing with the filters. I landed on a final product that for the most part, I was satisfied with.

“Most part” gets thrown in there because when I was done changing the settings, I noticed that the reflection of my index and middle finger, which I wrapped around the back of the phone to stabilize it, was now noticeable in the photo.

Did it matter? Ultimately I naively thought that I was the only one who would notice it enough to detract from the cityscape. So I posted it, people started to like it and I continued on with my show.

Fast forward to Tuesday morning at 11 am. I woke up, looked at my phone and saw 8 missed calls. Every call was from either a private number (which the studio hotline comes up as) or Johnny on the Street.

Turns out that the reflection mattered, at least to Todd and Jayde. In the 8 am hour, right in the middle of the show and on a day when later that hour Ed Sheeran would join the program, the entire cast spent five-and-a-half minutes contemplating what was in the photo.

Jayde guessed a falafel before finally admitting that she thought it looked like “female genitalia.” Annie wondered if it was a fortune cookie. Johnny’s guess was along the lines of Jayde’s but then he went with lips. Monk and Todd joined in on that sentiment… perhaps wax, candy lips? No, too wide they concluded.

How would they really know that?

@jayderade guessed falafel. @annieonair guessed fortune cookie. @johnmingione guessed… well we're probably not allowed to type that. @joepardavila was busy trying to call @ralphieaversa to no avail. And @toddpettengill guessed 💋 before his correct answer of ✌. Mystery solved. Phew. Or is it?

Anyways, Todd and the crew eventually settled on fingers… the kind that look like everything but fingers. After that, the discussion turned to whether or not I realized the reflection when I posted it.

“Nah I don’t even think he saw it,” Todd stated definitively.

I’ll tell you what I didn’t see: writing a 400 word blog post about a five-and-a-half minute conversation on the morning show about my two fingers.