a new year’s eve to die for, sopranos style…

Ralphie Aversa  —  01/02/2008 — Leave a comment
my last sign-off of the year inside the bht world headquarters came just before 3 in the afternoon on the 30th. after unplugging my headphones and scampering down the back steps, i hopped in my car and headed off to scenic stamford, ct to spend a night with the girlfriend. upopn arrival, i b-lined to the kitchen. three dishes of homemade sauce and pasta later, and i was 24 hours away from the new year.
my girlfriend is an early riser – she usually leaves for work around 8. many would be surprised, but there were no issues in waking up with her to leave. as she headed to the office, i drove to new jersey. with the day off, i decided it’d be an opportune time to visit my friend patrice in wayne. patrice and i worked endlessly on launching “msnbc on campus” at syracuse university. anywho, she received a couple new gadgets for christmas that i would help her become accustomed to. plus her dad promised homemade italian omlets.
after stuffing our faces and configuring the electronics, patrice and i set off north to partake in a little sightseeing – sopranos style. as you might know, i adore the sopranos. as you may not know, pretty much all of the scenes filmed throughout the series were on location at real-life jersey hotspots – or atleast as hot as one’s spot could become in the dirty jerz. we only had a few hours, but three key locations were only a half-hour away. off we went, digital cameras and appetites in hand.
first stop – pizzaland in north arlington. the pizzeria is shown in the opening credits for the show – only garnering a couple seconds of camera time. despite this, fans flock to the pizza shop on a weekly basis. the owner, al, informed me that to this day, he still ships pies across the globe to sopranos supporters. another interesting tidbit – the owner said that he shut down the store front for two days leading up to the finale, due to the volume of orders he received.

mama mia. after all of this though, the guy was nice enough to chat for a half hour and offer patrice and i slices on the house. we obliged and were delighted. the pizza is homemade, from the dough to the toppings, and cooked to perfection inside an oven. the crust contains the perfect amount of thinness, and the slice sizes lend themselves to one-hand devouring.

as if we hadn’t eaten enough, our next stop brought us to one of the more infamous soprano landmarks – holsten’s brookdale confectionery in bloomfield. garden state residents knew the diner for it’s chocolate cake, not it’s onion rings – until this past summer.

yes, the diner that meadow couldn’t quite park in front of, and tony didn’t quite get wacked in, really does exist. patrice and i avoided the spots in front and parked around the corner, walking inside without the anxiety that we held while watching cast members and extras enter during that last episode.
THE booth was already inhabited by a couple of regular patrons, so we settled on a spot directly across, two rows to the right. as if we needed a menu? an order of onion rings went to the back, and we waited while checking out the surroundings with our wide eyes. 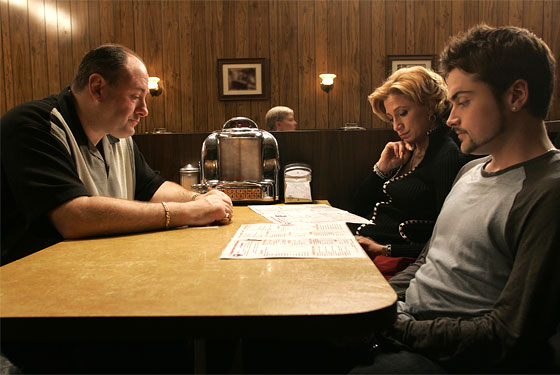 i can safely say that until the food reached our table, the only impressive trait of the diner was the intangible – that the final scene of the sopranos was filmed there. take that away, and there’s no way i would’ve driven a half hour for breaded circles of a vegetable that i despise.

the onion rings were satisfying, as were the milkshakes we ordered for no other reason than we were craving milkshakes. after paying the bill we spoke with the owner, who says that he still gets sopranos tours coming through the diner atleast twice a week – the busses stopped daily during the week between christmas and new years. in the interest of the people waiting behind us to pay and leave, we said our goodbyes and headed to the final desitination of this impromtu trek across sopranos-friendly real estate.
come to find out, one of patrice’s friends in cedar grove knows the exact location of the house that “tony soprano” called home. joey, patrice, and i sped up this mountain and cedar grove, passing the houses of wendy williams, wyclef jean, and goodness knows who else on the way. finally we arrived, that all-to-familiar winding driveway, the house perched up above lots of green, and the endless woods that tony scampered through while attempting to evade the feds at the end of season five.
of course i snapped a few pictures. i wish i had brought the new white robe the gf gave me for christmas, along with a copy of the star-ledger… i could’ve reenacted a scene very familiar to sopranos fans – tony waking up, throwing on the robe while half asleep, and stumbling down the drive in an effort to retrieve the paper.

the day of adventure had come to an end, so patrice and i retreated back to her house. i jumped back in my car and drove back to wilkes barre, where i would meet my lurver and commence the new year’s celebration.
nonetheless, i finally experienced jersey first hand, and it really isn’t as bad as one would think, or for that matter, as one would witness on television.