Don’t necessarily call it a homecoming to hip-hop, but for MTV News reporter Sway Calloway, it sure felt good to cover the America’s Most Wanted Music Festival’s first date in Scranton, PA.

“I’ve been on the road doing a lot of stuff with MTV,” explained Calloway – mentioning the Michael Jackson memorial as well as numerous political events. “I really wanted to come back to the core of how I got in this game, and that’s through rap, hip-hop music.” 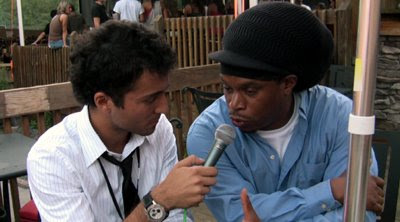 Producers and MTV News beat reporter Shaheem Reid joined Calloway to cover the event. The team from MTV arrived on Sunday and caught Lil Wayne’s dress rehearsal. By all accounts, it seemed as if the crowd at Toyota Pavilion at Montage Mountain would be in for a special show. But the event impressed Calloway on other levels as well.

“Especially in this time of economic crisis, people said you can’t put together a tour,” said Sway. “Young Money Records, Lil Wayne, stuck their neck out there and they got truly America’s most wanted.”

The lineup is something to marvel at – the front of the bill includes Jeremih (top 10 hit in “Birthday Sex”) and Pleasure P, formerly of Pretty Ricky. Soulja Boy Tell ‘Em takes the stage next, followed by Young Jeezy and Wayne – who brings his entire Young Mula crew for the ride. At least for now, that will be sans Drake, who reinjured an already torn ACL on Friday in Camden, NJ. The R&B singer returned to his home of Toronto, where he will undergo surgery this week.

But with a tour this deep, almost any hit to the card is sustainable, especially when you have one of your opening acts tossing out thousands of dollars to the crowd.

“I’ve seen that gimmick over the years a thousand times,” Sway noted of Soulja’s parting act. While performing “Turn My Swag On,” the 19 year-old reached in to his pocket and began tossing out Ben Franklin’s to the crowd as if he was shooting free throws in a gym. “Soulja Boy is the first person I’ve personally witnessed to throw out real, $100 bills, continuously for at least six minutes.”

The MTV reporter estimated that Soulja gave “at least $5,000” to the fans.

“I talked to people who walked away with a couple hundred dollars,” he said. “(Soulja Boy) paid them, to come see him.”

Certainly no one needed any more incentive to show up. Over 12,000 people entered Montage Mountain for the event – a solid figure in an area that has generally struggled to support hip-hop and rhythmic shows. Again, just another testament to the lineup put forth by Wayne. The “maturity” of the acts also impressed Calloway. While we spoke, Young Jeezy performed behind us, backed by a 9-piece band.

“Music is a universal communicator,” said Sway. “You see people right now, partying together, to one beat… and it’s a great venue.”