R&B newcomer Jeremih learned an important lesson on his first day of touring: sometimes, you need to roll with the punches.

“The keyboard should’ve been here,” he explained while backstage at Toyota Pavilion at Montage Mountain. “It’s on its way; it was 15 pounds over capacity for the plane limit.”

But at least the singer himself made it. Jeremih flew to Scranton from El Paso, TX – touching down in NEPA around 4:30. He quickly drove to the venue, and snuck in a quick sound check before doors were opened to the public. I spoke with him just past 6 p.m., approximately 40 minutes later he hit the stage to croon for 15 minutes, ending with the up-tempo version of his Top 10 hit, “Birthday Sex.”

But if you’re headed to another stop on the America’s Most Wanted Music Festival, don’t assume that you’ll hear that particular cut.

“It all depends on what people are really feelin’,” said Jeremih. “It was up to me, I’d perform both of ‘em.”

After consulting with myself and Kidd Kraddick In The Morning producer Adam, Jeremih and his manager decided on the up-tempo remix, as that is the version heard on 97 BHT.

Jeremih isn’t your average R&B singer. Born Jeremih Felton in Chicago, the singer entered the University of Illinois at age 17. The early entry to college forced Felton to grow up quickly, and he would soon learn a lot about himself and his surroundings.

“I ended up getting a hold of some IDs,” revealed Jeremih, who blamed his downfall in part on living away from home in a co-ed dorm. “Long story short, I’m the youngest kid in there, but the oldest dude in there.” 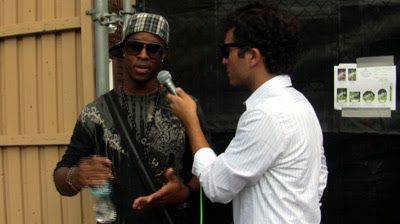 The singer soon found himself with a revoked license. But Jeremih credits that experience with helping his career: during that two year period, he was forced to sit home and work on his craft. Jeremih transferred to Columbia College Chicago. He left a semester short of a degree to pursue his career, but plans on finishing at some point.

“Education is key,” said Jeremih. “It got me this far.”