EXCLUSIVE: Katy Perry’s Camp Allegedly Calls Driver Out For Staring At The Singer

An alleged violation of Katy Perry’s transportation rider led to an argument with a local driver for the superstar in Philadelphia on Friday. Although two separate sources confirmed that there was an incident, only one specified that the driver was replaced. This leaves to speculation how serious Perry’s management is about some of the requirements of the singer’s driver.

Image: Kevin Mazur/WireImage
If nothing else, don’t equate the “I Kissed a Girl” singer to Van Halen – because when the princess of pop writes something in her rider, she means it!

Of course, it was the aforementioned band who gained “rock star notoriety” for requiring in its performance rider that all of the brown candies be removed from any bowl of M&M’s backstage. Turned out Van Halen wasn’t discriminating against brown M&M’s, but rather making sure that the promoter was actually reading the performance rider. An artist’s rider also includes specifications regarding equipment, safety, travel, and other amenities and accommodations. The band reasoned that if the promoter didn’t pay attention to the food section – could there also be other parts of the document unattended to?

Katy Perry’s 45 page concert rider, leaked to The Smoking Gun before her “California Dreams Tour” commenced, reads typical for a star of her caliber. She’s adamant on flower arrangements in her dressing room not containing carnations (allergies?), requires a “1 bedroom presidential suite” in a “5 star property,” and would like water dispensers, not bottles, backstage – a nod to her eco-friendliness.

The singer also outlines a “Principle Driver Policy.” The page contains 23 bullet points for whoever will be taking the wheel of Perry’s automobile. It is this section of the rider that mandates the driver “not start a conversation with the client” and “not stair at the backseat thru the rearview mirror.” 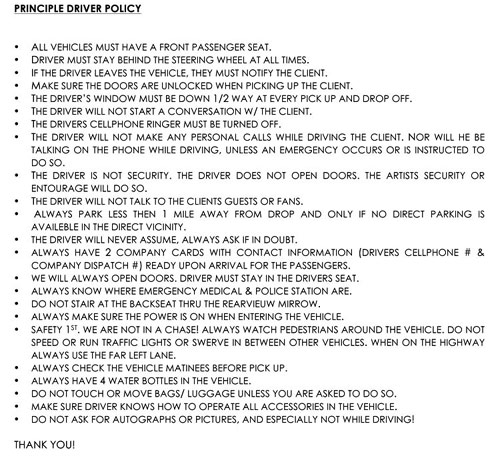 The two sources allege it was the latter requirement that Perry’s driver in Philly did not follow. In the wake of the alleged incident, all drivers on Saturday night at Mohegan Sun Arena in Uncasville, CT were reminded of the policy.

At face value – the excessiveness of the driver demands seem diva-ish. But after reading each one, the bullet points seem to reflect more of a concern for Perry’s safety than anything else (would you want your driver staring at you or looking at the road?), and perhaps were inspired by previous incidents the singer and her camp faced.

Another backstage move by Perry which could be perceived as uppity but not listed in the rider is her refusal to speak with any local staff prior to a show. She acknowledges the staff backstage, usually with a smile, and does speak with fans. This is probably enforced to keep staff from talking instead of working and more importantly, to preserve Perry’s voice. In line with that train of thought – meet and greets with the artist happen almost immediately after shows.

If you’re wondering, Perry does in fact need her voice. She spends about two hours every night on tour belting out hits from her two albums for her fans – no lip syncing. Katy also mixes in quirky anecdotes about the songs and acoustic covers of other tracks including a funny rendition of Rebecca Black’s “Friday.” When the singer isn’t using her voice, she’s literally sprinting from one end of the stage to another to take part in one of the many costume changes throughout the show.

So yes, Perry does need her voice and her energy. I suppose it’s not too much that she asks to be driven to the venue in a safe manner as well.

Besides, it’s not as if she won’t eat brown M&M’s or anything.

Listen to Ralphie’s interview with Katy from the 2008 Vans Warped Tour below: