Mohegan Sun at Pocono Downs is continuing its evolution from race track to casino to destination resort. The most recent expansion plans not only include a new hotel and convention center but also a 1,500 seat entertainment venue for concerts and performances.

“It’s one of the additions that we wanted to add to bring more revenue to the community here,” explained Mohegan Tribe Chairman Bruce “Two Dogs” Bozsum, following a groundbreaking ceremony in which he used a jackhammer. “When you have a convention center and it’s a destination, people can stop by, spend three or four days here, they can visit all the local businesses out there.”

Bozsum also noted that the resort will rely on local businesses for supplies and services throughout the operation. Mohegan officials say the project will create over 250 permanent jobs and in excess of 600 once the expansion opens next year. The Mohegan Chairman also confirmed that the announcement does not change the tribe’s relationship with Mohegan Sun Arena at Casey Plaza. 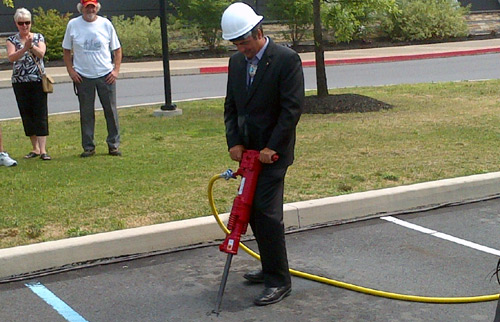 “When you’re in the entertainment business, there are different entertainers for different size venues,” Bozsum said. “There’s a whole class of acts that go out there and fill 1,500 seat rooms, but they can’t fill 10,000 or 20,000. So, there’s two different levels and we work with our outside vendors to bring in the right size entertainer for the right size group and it works out better.”

Bozsum expects a ribbon-cutting ceremony for the property in a little over a year. He also revealed that the Mohegan Tribe has not proposed additional gaming space with the expansion, but noted that once the hotel is up and running, that aspect of business would be reviewed.