She’s been on a strict regimen – waking up at the crack of dawn for workouts and following a rigorous diet. But what is Miss USA to do on Thanksgiving, less than a month away from the Miss Universe pageant?

If you’re 20 year-old Cranston, RI native Olivia Culpo – you might end up counting it as a cheat day.

“You have to treat yourself,” Culpo told me in studio on “The Ralphie Show.” “I think on that one day, I’ll treat myself a little, but I have to stay focused. Otherwise, slippery slope!”

The crown-holder doesn’t buy in to the idea that her Miss Universe entourage would keep her in line – not when she comes from a big, New England-based Italian-American family. 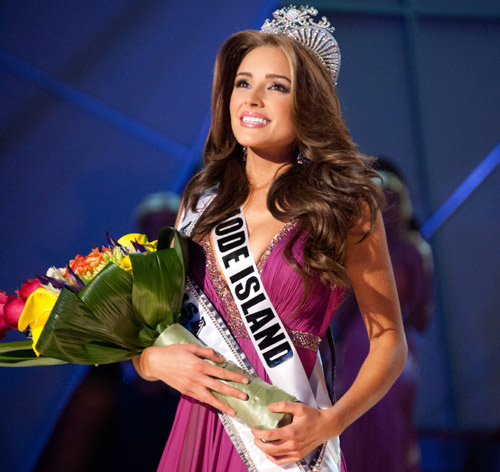 “They like to stuff food down your throat,” Culpo joked. “My mom’s always like, ‘Eat your sandwich!’”

Before anyone partakes in the holiday delicacies, the Culpo family will be in New York to watch Olivia appear in the Macy’s Thanksgiving Day Parade. Miss USA then plans to head back up to Rhode Island for the remainder of the day, but soon enough she’ll find herself back in New York. After all, the Miss Universe pageant is in just a few weeks. The competition airs on NBC December 19 from Las Vegas at 8 pm. Fan voting is already live at this link.

“You’d be surprised; for ‘Universe’ there’s such less time to prepare because I have my duties as Miss USA, which are my dedications to philanthropy and other things like that,” Culpo revealed. “And then on top of that, I have to prepare myself for Miss Universe.”

Between the daily itinerary and preparations, it leaves the 20 year-old little personal time. Thankfully for Culpo, she lives in the city that never sleeps.

“I love it here. Nothing ever closes,” she noted. “That’s great for people who don’t sleep like me.”

All kidding aside, Culpo revealed that once her term is finished, she’ll look to continue her college education from Boston University at New York University.