INTERVIEW: Walk The Moon On Chart Success, Next Single And Dedicated Fans

The buzz continues to build, the schedule continues to fill up and the guys that comprise Walk The Moon continue to find themselves in an album cycle that admittedly they want to see stretch out for as long as possible. When you look at what has happened in 2015 to the group, you really can’t blame them.

“Shut Up and Dance” is in serious contention for “Song of the Summer.” The band’s next single from its sophomore album Talking Is Hard will be “Different Colors,” an anthem of different gravitas but near-equal jubilation. And the Cincinnati-quartet is playing all types of stages: as headliners, as supporters for The Rolling Stones and as performers on “Good Morning America” and at MLB’s Home Run Derby in their home city. At this point (or at least the day after their date in Detroit with Mick, Keith and the boys), lead singer Nick Petricca credited “caffeine and adrenaline” with fueling the band, but downplayed any changes of seismic proportions in the group.

“We’ve always kept ourselves working around the clock, so in a way not much has changed,” he told me on “Ralphie Tonight.” “I think we’re going to see the results (of the single’s success) the next time we tour.”

Walk The Moon has already noticed a change in the crowd at shows, especially when those opening notes of “Shut Up” hit the speakers. But their last headlining tour sold out before the song became inescapable.

That’s not to say the single’s success hasn’t brought about other change. 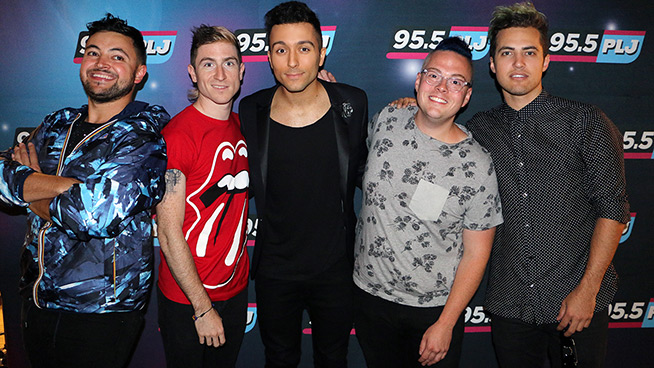 “I get a whole lot more texts now saying, ‘Hey, I heard “Shut Up and Dance” in X-Y-Z bizarre situation,” noted guitarist Eli Maiman. “So like – ‘I heard it at Cardinals Stadium in St. Louis, or I heard it in Victoria’s Secret this morning.’

When the laughter subsided, WTM told me that they also want to collaborate with other artists they enjoy; Petricca said the band hasn’t “sold a song” to anyone yet but they have written with other musicians, and Maiman teased a possible Walk The Moon-feature for another singer could be released soon.

The lead singer also mentioned that there’s a chance fans could hear some new material from the group later this year. At the moment the focus is on “Different Colors,” a song that started as a rallying cry but with recent news events such as the Supreme Court’s lifting of same-sex marriage bans, has turned in to more of a “victory march.” The single celebrates diversity and aims to unite.

“It feels really relevant to be playing it right now, and really cool,” said Maiman.

“It’s incredible,” Petricca added. “We’re just all on the same team out here and it’s cool to feel a part of a movement.”

That idea of community is something that the band can easily be reminded of every night, as they perform in front of thousands of face-painted fans whose sole objective is to have fun. No wonder they don’t want this to end.