INTERVIEW: DNCE Isn’t Focusing On Another Album… For Now

“For us, we focus on songs right now,” lead singer Joe Jonas told me backstage at the Billboard Music Awards. “We’re always writing so, if something just kind of comes together and it’s an album (then) so be it, we’re going to release it.

“We’re not really trying to lock us down to like, ‘Here’s a release date for a record.’ We got a song? Let’s just put it out.”

Jonas and company dropped an EP with the breakout hit “Cake By The Ocean” before releasing a full length album a year later. The quartet is back with its first single since: the Nicki Minaj-featured “Kissing Strangers.” 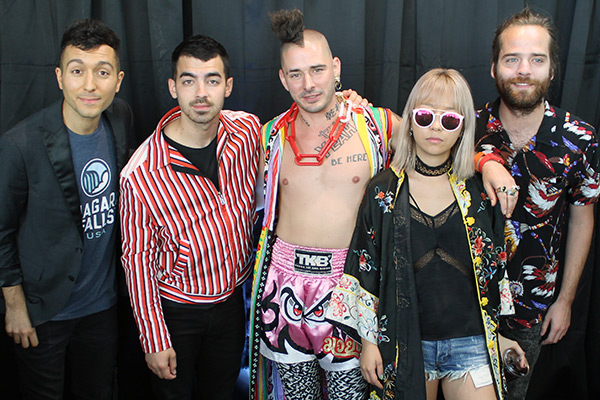 “We’re huge fans of her’s,” bassist Cole Whittle said. “We thought about it and she hadn’t really done anything in the rock-and-roll world with like a raw band and we approached her. She was in to it.”

Whittle noted the “aesthetic marriage” between the two acts and how both thought it was a good idea. For Minaj, the only time she really came as close to a “rock band” vibe was her feature on the track “Knockout” from Lil Wayne’s “Rebirth” album. While the song did not fare too well on the charts, it did sell over a half-million copies in less than a year.

Meanwhile, DNCE probably wouldn’t mind replicating the success of “Cake,” which earned platinum-certification in a number of countries including over 3 million served in the U.S. The band will play a smattering of shows this summer before joining Bruno Mars on the Latin America leg of his “24K Magic World Tour.”