"The RRS" In The Press Last Week

ALL ACCESS covers “The RRS” coverage of Ryan Cabrera/Audrina Patridge 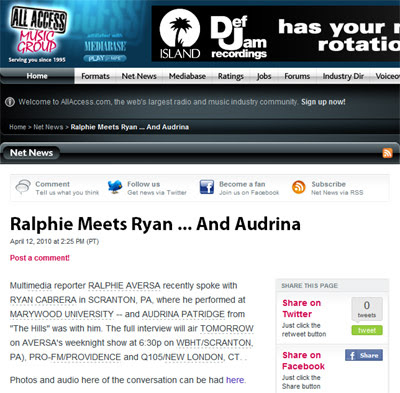 MTV NEWS AUSTRALIA cites “The RRS” in report on Ryan/Audrina 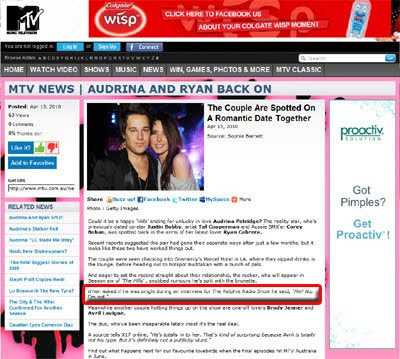 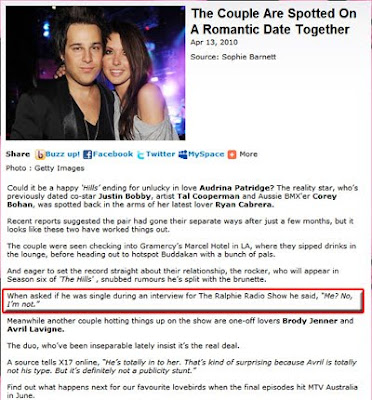 It was a good week 🙂

This isn’t your average meet-and-greet tale.

Buchinski is a 97 BHT listener and Archbald, Pa. resident. Like many of her peers, she loves “The Bieber.” Matter of fact, she wasn’t satisfied by just professing her admiration by missing two days of school to see Justin perform inside The Mall at Steamtown. Nor did winning passes to check out Bieber on “Good Morning America” satisfy her, um, sorry – Bieber Fever.

Nope, instead Alex wanted to see her favorite artist on “Saturday Night Live.” Step one: take to Twitter.

“I was just sending (links, comments) out there, like I didn’t send it to ‘Saturday Night Live’ or NBC or anyone like that,” explained Buchinski on “The Ralphie Radio Show” – a radio show that Bieber has been interviewed on twice. “I was just sending it out there, trying to get more followers to support the idea, and it worked.”

In no time, Buchinski found herself in the center of a viral marketing campaign to land Bieber on “SNL.” Alex’s account, “BieberOnSNL”, has close to 10,000 followers. Bieber himself has “at replied” – or mentioned Alex’s name in a Twitter update, on three different occasions. Yet, Buchinski still has no idea how Bieber or his team figured out that she was one of the forces behind it.
—
Download the interview

But Justin did, and offered Alex four VIP tickets to check out his performance the following afternoon. Bieber taped an edition of “Walmart Soundcheck” at the Highland Ballroom in New York City. The teenager made the trip to the concrete jungle with her parents and younger sister. Her father, Chris, didn’t know what to expect when he arrived. But upon stepping foot in the front door of the venue, the dad was immediately taken aback.

“We went out there, and I thought it was gonna be just a run-of-the-mill kind of thing,” Mr. Buchinski admitted. “But I went to the door and I said ‘I’m looking for Scooter.’ He was right there, and he took me right in.”

Bieber’s manager immediately handed over wristbands for VIP access for the family of four. Then, Braun took them all backstage, to meet Justin and the band in their dressing room.

“It was phenomenal,” Alex’s dad said. “(Braun) was really, unbelievable. He even gave me his e-mail address to keep in touch; I mean he was a fabulous guy.”

But the VIP experience didn’t end there. During the taping, Bieber performed “One Less Lonely Girl.” Let’s just say, the only girl that did not feel lonely in the crowd was Alex, who spent the duration of the song literally just a few feet away from the pint-sized pop star.

“He sang ‘One Less Lonely Girl’ to me on stage, in front of like, hundreds of screaming girls,” recalled Buchinski. “It was just amazing.”

“Walmart Soundcheck” featuring Justin Bieber will premiere on May 15 online and throughout Walmart stores across the country.

VIDEO: Fox 56 News At 10 Covers "The RRS" Interview Of @BieberOnSNL

14 year-old Alex Buchinski created a Twitter account called “BieberOnSNL.” The Archbald, Pa. native helped teen star Justin Bieber land on “Saturday Night Live.” Bieber repaid Alex by giving her four tickets to his private performance the next day for Walmart Soundcheck. She shared her story on “The RRS.” The full interview will air Tuesday at 7 p.m.