Mike Tyson reinvented himself – from a feared yet confused and conflicted fighter to a feared, confused, conflicted, but now much more lovable actor. The entertainer credits two things with his comeback.

The “Punch Out” video game star also attributes his new-found success to staying away from drugs and alcohol.

“I’ve been clean for four years. That’s awesome,” Tyson told me. “Once I overcame that, everything else was easy sailing.”

The Boxing Hall of Famer is currently touring the country with his show, “Undisputed Truth.” What started as a Las Vegas performance has been turned in to a one-man confessional with the help of director Spike Lee and a script written by Tyson’s wife Kiki.

“In Vegas, I had a rock band, I had a vocalist, I had a piano player… it was like a big show,” Tyson explained. “(Spike) cut it down; only me on stage with a prompter, and just music.”

Tyson compares preparing to the show with preparing for a boxing match.

Critics have essentially called his show just that; the Los Angeles Times raving that the performance “is a knockout.” Many reviews note that the stage reveals a softer side to “The Baddest Man on the Planet.” That part of Tyson’s persona could also be heard on the other end of the phone.

“I watched The Undertaker beat (C.M.) Punk, and then I fell asleep,” responded Tyson when I asked if he watched the WWE’s Wrestlemania over the weekend. “Did The Rock win?”

No, Mike. The Rock lost to John Cena. Perhaps “The Hardest Working Man in Showbiz” might be a better fit for Tyson these days.
—
Tickets for “Undisputed Truth” are available here.

TMZ’s Nicki Fertile filled us in on the ridiculous reason why Mike Tyson is getting sued. 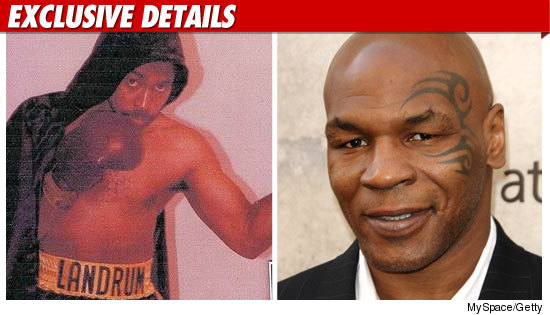