INTERVIEW: All Time Low On New Label, Fall Out Boy And More

A little over six years passed in between my last two interviews with the band All Time Low. During that stretch, I did run-in to the guys a couple of times. During a 2014 trip to Baltimore, the band’s hometown, for Derek Jeter’s last game at Camden Yards I ended up at the same bar as lead singer Alex Gaskarth. Talk about a small world: Gaskarth played a DJ set at that same venue the previous night. I was there the next day, Sunday, because it also served as Baltimore’s designated Buffalo Bills Backers Bar.

The place is owned by Alex’s bandmate Jack Barakat.

Then this past February while in Los Angeles for The GRAMMYs, I saw singer Cassadee Pope and her boyfriend, ATL drummer Rian Dawson outside of Microsoft Theater. They were chatting with friends and I was filming vignettes with Westwood One, so I just stopped briefly to say hello.

Of course, what I didn’t see was the engagement ring on Pope’s hand. Dawson popped the question that day. However a few weeks ago, the pending nuptials were reportedly called off.

Many things besides relationship statuses can change in six years. During the span in between our sit-downs, the Baltimore quartet added four studio albums to their discography and changed record labels twice. They switched up the band’s sound as well, although Gaskarth insists that the new sound has nothing to do with All Time Low’s new home at Fueled By Ramen. 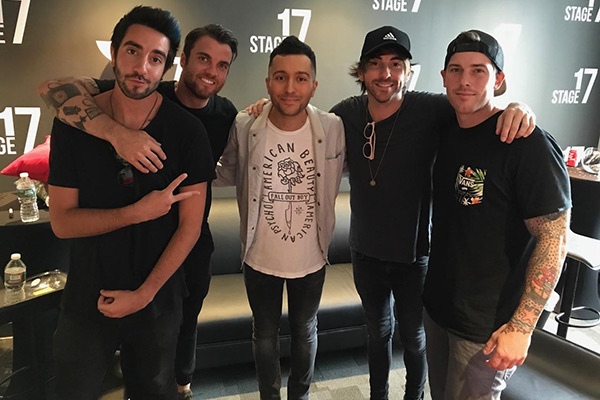 “I think the change in direction of music was something that was already happening within the band,” the front man explained. “We knew we wanted to try some new things and go in some different directions on the album.”

With All Time Low’s previous deal at Hopeless Records up, the guys felt that signing with Fueled By Ramen made the most sense.

“Fueled By is rad, they always have been,” Gaskarth continued. “I love their roster now and I love what they do.

“I think the biggest part of us switching (to FBR) was that we sort of had the idea in mind that we kind of wanted to try some new things with our music, and (FBR) was all about it.”

Fueled By Ramen most notably housed Fall Out Boy and still counts Panic! At The Disco, Paramore, Twenty One Pilots and Young The Giant as a part of its roster.

“Fall Out Boy served as inspiration for us when we were younger,” Gaskarth noted. “Panic!, we kind of came up around the same time; obviously different trajectory and different path but (Brendon Urie) has been at it just as long as we have and works just as hard, if not harder than we do.”

For the three aforementioned groups, it is kind of fun to pause-and-reflect on both their longevity and evolution: FOB still headlines arenas, Panic! was nominated for a GRAMMY last year and All Time Low is charting a single at Adult Contemporary radio. Of course there have also been other acts that have come and gone not just from the label, but the scene; something ATL is cognizant of.

“Yunno, we’ve seen a lot of our friends’ bands and other bands fade out, and it’s amazing to sort of be in the other category of still being able to do it.”

And if All Time Low continues in that category for six more years, the band can celebrate a 20th anniversary.