A few weeks ago John Legend held an album listening party for his forthcoming LP “Darkness and Light” at the Samsung 837 event space in New York City’s Meatpacking District. After playing a handful of unreleased cuts, the singer talked about the influence his gospel music background had on this new album.

And of course, if you’re familiar with Legend’s story, you know that Northeastern Pennsylvania played a role in that background. The “All Of Me” artist was the choir director at Bethel AME Church in Scranton while attending the University of Pennsylvania. When I brought this up to Legend recently in Los Angeles, he smiled and reminisced about his time in NEPA.

“A lot of it was just driving back-and-forth (between Philadelphia and Scranton) and then being tired and having to study and I was in an a capella group at school too so I was doing a lot of stuff at school,” he recalled. “And then every weekend I would come up to Scranton and I have a lot of fond memories. I have a lot of great friends that I made during that time that I stay in touch with. 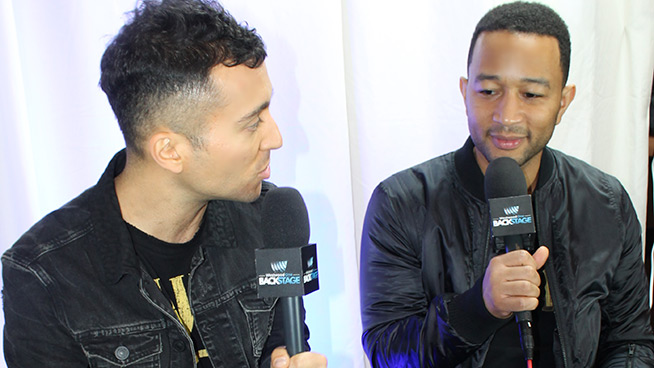 “It was a great time in my life; and even when I moved to New York, I would still drive over to Scranton every once in a while and play at the church. I love the folks in Scranton and Bethel AME Church.”

Legend didn’t say if anyone in Scranton has already heard his fifth studio album, but he did reveal that he’s played it for a few people.

“Well the reception has been amazing so far,” he replied when I inquired about how the new music has been received. “A lot of my friends that have listened to it think it’s my best album yet. I think it is too, but I always think that after every album so I won’t even let myself be the judge. I’ll just let the fans be the judge, but I’m really proud of it and I can’t wait for everybody to hear it.”

“Love Me Now” is the album’s first single; Legend performed it for the first time on a major award show at the American Music Awards. The song is inspired by his relationship with wife Chrissy Teigen. The couple’s very public marriage, along with his newborn daughter Luna, both serve as subject matters on the LP.

Samsung touch screen Coca-Cola vending machines… I’d pay the extra dinero to snag a bottle outta one of these.