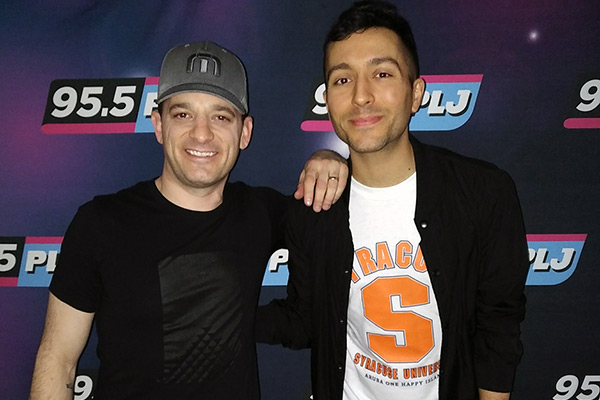 After calling in last week, Matisyahu stopped by “The Ralphie Radio Show” to perform a drumless version of the track, “One Day”. The remix, featuring Akon, will be showcased by NBC during the 2010 Winter Olympics, which kick off February 12. Matis chatted about his back and forth with Akon for the record, as well as his religion… you may learn something you never knew by listening to this interview!

The remix is available as a bonus track when Light is purchased on iTunes.

EXCLUSIVE: Matisyahu On The Winter Olympics, Akon, And Autotune

Matisyahu grew up playing hockey and cheering on the New York Rangers in White Plains, NY. Little did Matthew Miller know that he would eventually call the theme to a Winter Olympics a song of his own. “One Day” is a track off of his 2009 LP, Light. Now, a remix with rapper Akon will be featured by NBC throughout the 2010 Winter Olympics – which kick off February 12.

“There’s been an offer out from the Canadian (hockey) team,” joked Matisyahu, who called “The Ralphie Radio Show to chat about the track. “I’m trying to decide if I can do it to America.”

Kidding aside, the Hasidic Jewish emcee will be rooting for the U.S. – and will also appear in Vancouver to perform a few shows. Although he doesn’t record or perform with autotune – Matisyahu admits experimenting with it and other vocal effects in the studio. Despite this, he didn’t hesitate to collaborate with Akon.
—
Download the mp3

—
“My taste is kind of like, really varied,” he said. “As long as someone is using something tastefully and it’s being done in a way, I can get in to it, even if it’s not something I would necessarily choose to do myself.”

Certainly Matisyahu is no stranger to the mainsteam – his 2006 song, “King Without A Crown” cracked the Top 30 on the Billboard charts. While other artists may attempt to hide themselves from the masses, as to not alienate themselves from the underground – Matisyahu views the balance of the two realms as a challenge.

“For me, it’s about, definitely staying true to the music and not compromise, but at the same time, to be able to kinda make music and create something that people can really relate to,” he said. “Yunno, there’s an art to that, and I don’t really see it as compromise to do something more accessible as much as I see it as, yunno, ‘How do you make one of those songs that’s timeless?’”

An artist who feels it’s more of a challenge than a cop out to create something for both the mainstream and the underground – who knew?