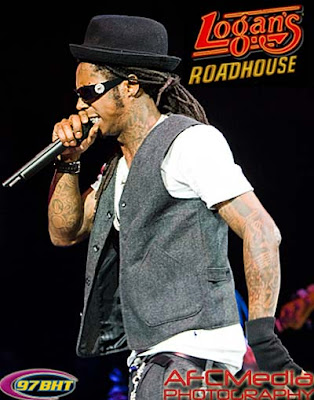 if it weren’t for logan’s roadhouse, the lil wayne show at the wachovia arena might not have been a reality.

while the “alledged” conflicts centered around sound systems and medal detectors in rochester and boston respectively, a steak dinner and a hungry hip-hop artist almost pulled the curtains closed on this event.

apparently only a half hour away from reaching the venue, wayne’s people phoned in to wachovia. their demand: a well-done steak dinner awaiting for the “lollipop” artist. mission complete: the show goes on. mission fail: no performance.
petty from a guy making $210,000 – but with a-list artists these days, i can’t say i’m surprised.

weezy’s management specified that if any “pink” were to be found in this steak, the mission would be considered failed.

logan’s roadhouse rose to the occasion, delivering a hot, well-done steak dinner, complete with baked potato – in a record 10 minutes.

so if you’re reading this, and you’re dinner took about 55 – you now know why. blame the self-proclaimed “greatest rapper alive.”

call wayne petty – but do not call him ungrateful. weezy informed the staff that it was “one of the best meals he’s ever had” – and after the show raved about the arena and the fans that packed it.
of course, this would not be lil wayne’s last meal in nepa – as his crew made a stop after the show at denny’s.
and who paid for the rushed meal? no one – as logan’s was so honored to cook for wayne, that they would not accept payment from the arena.