Theory Of A Deadman revealed on The Ralphie Radio Show about a month ago that the band passed on a headlining Fall tour to support Daughtry’s arena tour. Chris Daughtry heard the interview.

“I was very flattered that they took us over (their own tour),” said lead singer Daughtry. “Any band like that, that’s doing it big in the rock world, that’s not too cool for school to hang with the Daughtry boys… we’re very flattered and honored.”

It’s certainly a humble statement from the front man of a band that has sold over 7.5 million albums worldwide to date. It seems as if Daughtry assumes nothing when it comes to the rock and pop realms.

“Same with Nickelback, when we did that tour… these guys are huge in the rock world, and we just feel like the freshmen in high school just trying to get our props.” Daughtry said.

Props or otherwise, the band is clearly doing something right as it readies for its first arena trek – a new venue that will bring a different performance.

“We’re gonna have pyro this time, I think,” said Daughtry. “Our stage is obviously going to be bigger – more production, more lights.”
—
Download the mp3

Click here to purchase tickets to Daughtry’s show at Wachovia Arena.
—
Chris noted that the target set time is about an hour and a half. This brings yet another facet in to view – the physical preparation.

“Any time you’re playing that long, as a singer, (it’s) definitely a stretch, especially when you’re used to playing, yunno, an hour at the most,” he said. “And these songs, some of them are just ridiculous to sing. Some of them… once you listen back to it, you’re like, ‘Why did I write that?’”

So Daughtry is hitting the gym to ready himself for the 36 date jaunt that begins October 19 in Topeka, KS. So is guitarist Brian Craddock, but he joked that it’s for different reasons.

“I developed, while in Germany, this beer gut,” Craddock admitted, while laughing. Although, Daughtry quickly pointed out that everybody sings during the show at one point or another.

Everyone doesn’t “tweet” though. Craddock is the self-described cynic of the crew – ever since a bad experience with his MySpace profile and spam, he stays away from the social networking sites. Meanwhile, Daughtry updates his Twitter account all the time. Apparently, he even checks his “at replies.”

“I think I see you on Twitter a lot,” Daughtry commented regarding my posts. “If I check, when I’ve only gotten maybe 40 or 50 tweets in, I can stay on top of it.” 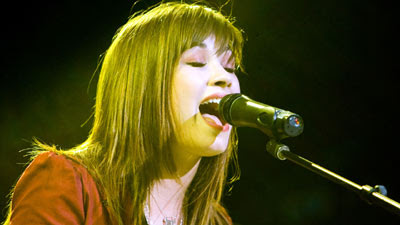 Another exclusive – Disney star, flight misser, and John Mayer’s favorite “Tweeter” Demi Lovato along with Ralphie Radio Show friend and American Idol runner-up David Archuleta will be at the Wachovia Arena on June 22. Tickets go on sale to the general public Saturday April 25. 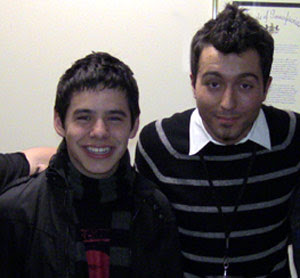 You read it here first – “American Idols Live” will return to the Wachovia Arena on Sept. 9, 2009. Tickets go on sale to the general public on Saturday May 9 at 10a.

Wonder if I’ll get in trouble for this…

· FRIDAY, 2/27/09, 7:00PM AT F-Y-E INSIDE THE MALL AT STEAMTOWN
· MEET DAVID ARCHULETA WHILE HE SIGNS YOUR COPY OF HIS NEW SELF-TITLED CD, FEATURING THE HIT SONGS “CRUSH” AND “A LITTLE TOO NOT OVER YOU”
· LISTEN TO 97 BHT TO WIN ONE OF THE FIRST TEN SPOTS IN LINE
· PLUS LISTEN TO 97 BHT TO WIN FREE TICKETS TO SEE DAVID ARCHULETA AND LESLIE ROY AT THE CROCODILE ROCK CAFÉ IN ALLENTOWN
· POWERED BY JIVE LABEL GROUP, F-Y-E, AND 97 BHT

Click Here To Listen To Ralphie Interview David At The Wachovia Arena!

Ralphie Aversa  —  12/27/2008 — Leave a comment
The promoter told me yesterday morning that the show will be postponed to early next year. Ticket holders can keep their tickets for the future date or receive a full refund from the Arena box office.

Greetings from Niagara Falls – I first found out about this yesterday, however for some reason I couldn’t send the item to Blogger from my Blackberry.

I’ll have more on this, with possibly an exclusive word from the promoter, Monday afternoon on the show. Be listening around 5 PM.