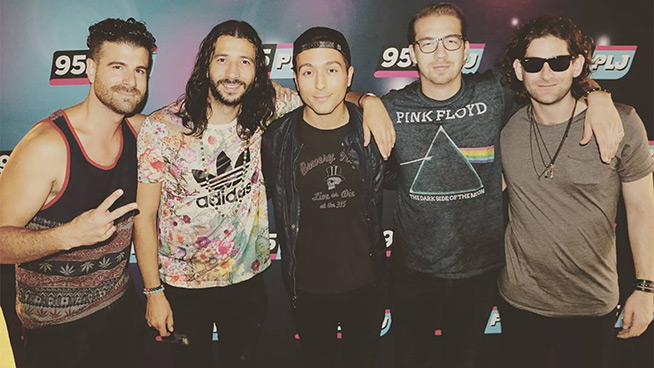 This track has been out for a minute, but apparently needed a verse from Mr. 305-better-said-Mr. Worldwide to be deemed, “radio-friendly.”

Most celebrities might not take working the red carpet of events as serious as others – walking through quickly, avoiding the media, briefly posing for photographers, and heading inside to the event. For Jamaican dance hall king Sean Paul, this is far from the case.

“Everybody always asks me, ‘What do you like about these events (while I’m on the red carpet)?’ I’m like, ‘The networking!’” Paul said last week – calling in to The Ralphie Radio Show from Jamaica.

In Paul’s case, he’s converted two different red carpet meet-ups in to big studio collaborations. Over the summer, he met Keri Hilson on the red carpet of the BET Awards. The two would duet for a track called “Hold My Hand” – which can be found on the iTunes version of Imperial Blaze. Now the singers will meet again – in Wilkes-Barre on November 13. 97 BHT and E&R Entertainment present Sean Paul, Keri Hilson, and Colby O’Donis at the Wachovia Arena.

“She gon’ be on the show, so I dunno what’s gonna happen there,” Paul teased, hinting to a possible on-stage performance of the track from the both of them. “Yo, I’m looking forward to it. I’m really, really looking forward to that.”

Sean Paul also converted another awards show meet-up in to a possible hit record – he first met Jay Sean at the MTV VMA’s this past September. Shortly after, the two headed in to the studio to record, “Do You Remember” – the follow-up single to Jay Sean’s “Down”, which features Lil Wayne.

Lil Jon also cameos on the track – which features two British artists. Jay Sean is from England – and Sean Paul’s grandmother is from overseas as well.
—

More on the big show here.
—
While Sean Paul recorded a potential hit record thanks to a VMA encounter, he also avoided a potential disaster – as he ran in to his friend KanYe West on the red carpet as well.

“(West) gave me some of that Hennessey,” revealed Paul. “I’m just glad I didn’t take more of that.”

“I’ve been there before,” said Paul. “I know that feeling.”

Perhaps this is just more fuel to Sean Paul’s fire (no pun intended, here) in his argument that marijuana should be legalized. The singer of such tracks as “Gimme Di Light” and “We Be Burnin’ (Legalize It)” – Paul thinks that alcohol does much more hard to society than the illegal substance.

Paul also cited the overpopulation in America’s prisons as a reason he’d like to see marijuana legalized by the President, who has already said that the drug isn’t a priority for the administration at the moment.