Sunday night should have been a magical evening for Chris Brown and Rihanna, with both scheduled to perform at The Grammy Awards in Los Angeles. However the morning hours wiped away any chance of that, with an alleged domestic violence alteraction that’s left the R&B singer with a $50,000 bail and many people asking lots of questions. 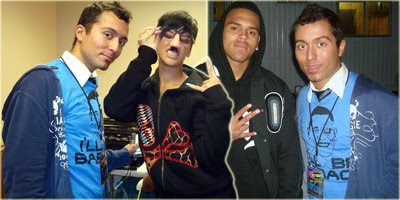 Few answers are known, but here’s are the facts: The Los Angeles Police Department booked Brown on Sunday for suspicion of making felony criminal threats. The crooner posted the $50 K bail and left authorities before 9 p.m. The Los Angeles Times reports that sources close to the investigation identify the female in the incident as Robin “Rihanna” Fenty. Standard procedure for the department involves not release the alledged victim’s identity.
A victim tipped off police to the incident around 12:30 PST – calling 911 to inform authorities of an altercation that involved a visably-injured female. Brown left the scene before police arrived, however turned himself in later. The victim identified Brown as the attacker.