EXCLUSIVE: Quite The Ride, Literally, For 3OH!3

It was not a smooth ride, literally, to the top of the charts – but the crunk rock group 3OH!3 found a way to arrive.

The Boulder, Colorado-duo of Sean Foreman and Nathaniel Motte stopped at Toyota Pavilion at Montage Mountain for the second consecutive year. But what a difference 365 days makes. Last summer, the band played in almost complete obscurity on Vans Warped Tour – behind a lineup that included the Gym Class Heroes and Katy Perry. This time around, 3OH!3 headlines the summer jaunt, all while owning the most spun song on radio stations across the country in “Don’t Trust Me.” Now the band finds itself in a similar position as its friend Perry found herself in last year: touring the country while fulfilling media obligations across the globe.

“We just flew to London and back two days ago,” said Foreman. “On our passport, the date of entry into the U.K. is the same back into New York.” 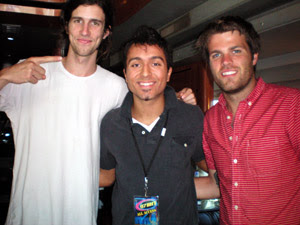 “It was a whirlwind trip,” added Motte, who while on the plane took a picture of a glass of champagne he drank – Nat eventually sent a link to the picture out as a Twitter update.

“It’s some new stuff, I don’t even really know about it,” he commented about the bar, on the plane, which he and Sean drank at.

Coincidentally enough, 3OH!3 found themselves across the pond with Perry. Nat and Sean became good friends with the “I Kissed A Girl” singer last summer during Warped Tour. The duo supported Perry on her solo tour. Now Katy, who owns three top 10 hits in the States, will cameo on a remix of 3OH!3’s next single from their CD Want, “Starstrukk.”

“(We) made it bigger, opened up a spot for her on the song,” Nat revealed of the track. “It should be going to (radio) pretty soon here.”

With radio stations already familiar with both acts, the song will surely catch the attention of DJs and listeners alike instantly. The timing is perfect for the group as well: 3OH!3 continues radio promo while finishing up Warped Tour. But again, the path traveled can be bumpy. That proved no more true last Wednesday, when 3OH!3 found itself in a bit of a dilemma: the band’s tour bus broke down.

“We got this new one that has six bunks, and there’s nine of us, so…” Nat explained. “I ended up cuddling with our bass player last night. Waking up with some stubble against your (face) is a little weird, but it’s not altogether unpleasant.”

Considering where this band came from – the idea of band mates and a backup tour bus must be a welcome notion. Before, Nat and Sean would play themselves, now the emcees are backed by a slew of musicians.

Yet despite success, one thing hasn’t changed: the Warped Tour after parties. Nat, who also DJs, still spins at every party he is available for. After the Montage Mountain show, Warped Tour band and crew members joined in for a BBQ and Michael Jackson-themed party, with white gloves and moonwalks encouraged. While techs tore down the set up and musicians mingled with groupies, there stood Nat, quietly in the corner, seamlessly spinning the soundtrack to the late evening. You would’ve never assumed that the 6-foot-plus DJ, flanked by not even a security guard, comprised one half of the duo behind one of America’s most popular songs.