Okay, before I get in to the story, let’s post this: 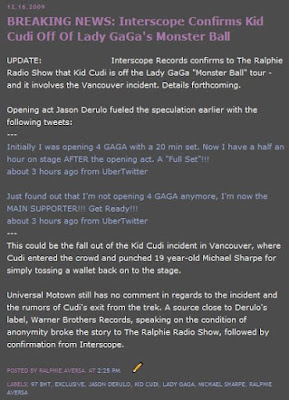 That is a screen shot of my blog earlier today with the story that I initially broke in regards to Kid Cudi. If you read the screen shot, you know the details of the story. A source at Interscope Records confirmed to me that Kid Cudi was no longer on Lady GaGa’s tour. They did not specify whether Cudi left or was asked to leave, but according to my source, this incident in Vancouver may have played a role.

I posted the article and immediately distributed the link via e-mail, Facebook, & Twitter. It wasn’t long before both MTV and TMZ got wind. Next thing, Interscope received calls. Next thing, I received a call, and was asked to take it down. I was told that some type of official statement was forthcoming.
Please keep in mind, I did nothing wrong – I was never asked not to talk about the information I received, and all parties involved were aware that I was a radio show host. Nonetheless, I obliged. Essentially, I accomplished my mission: to break the story first.

When you report on a story, you have to put all personal feelings aside. Interscope Records has always, always treated me well. Interview with Lady GaGa, New Kids On The Block, Keri Hilson, Ryan Tedder… I could go on… all not possible without some level of cooperation from Interscope.

That being said, I value my relationship with the label a great deal, and therefore took the link down. It’s now back up in a different form – because clearly the story is out there, so whether it’s up on my blog is neither here nor there at this point. Kid Cudi released a statement. The storyline has come to a close.
Why repost? My good friends at TMZ linked to The RRS blog. I’m saving that story for a different post. Long story short, I didn’t want TMZ to look out of place for linking to my blog, considering the story was missing from it when the link was put up.
Tomorrow on The RRS… we’ll speak with Michael Sharpe, the student who was punched, and get his reaction to the incident.