Life changes when you go platinum. But you don’t have to tell Mike Posner that. The “Cooler Than Me” crooner recently noticed that his iPod was no longer working out of the right ear. Most of us would bring the device to the Apple store – maybe some would see if a friend could fix it. But when the iPod carries a ton of unreleased tracks belonging to both yourself and others, you don’t take any chances. 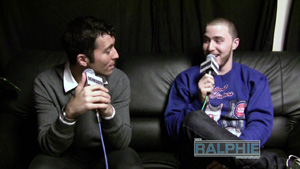 “I’d be the reason for this big music industry leakage,” feared Posner of if the broken iPod got in to the wrong hands. He sat down for an interview which aired Monday evening on “The Ralphie Radio Show.” “I had to destroy it.”

The verb “destroy” might be an understatement, as photos he later sent to Twitter followers showed the iPod classic completely dismantled. Posner described how he went about dismembering the music player.

“I was in a hotel room in Cleveland, and I took the couch that was in the hotel room, and I put the iPod under it and just smashed it.”

Something says he probably did not learn that technique while studying at Duke University. Posner revealed that the iPod contained collaborations with the likes of Bruno Mars and Wiz Khalifa. His sophomore album is already about six tracks deep – although the main collaboration that everyone is talking about these days is the “Bow Chicka Wow Wow” remix featuring Lil Wayne.

“When I was making the album, working with Wayne wasn’t a possibility, because he was incarcerated,” Posner noted. “So it was one of the first songs he did when he got out and man, I just feel super blessed and honored to have somebody as talented as Wayne jump on my tracks ’cause… he’s the mother-whomping man!”

The “whomp” reference was a nod to one of Posner’s favorite cartoons, “Recess.” The Duke-grad had a chance to kick it with Weezy while shooting the single’s music video – and came away with nothing but positive comments about the Young Money emcee.

Posner is in the midst of a spring college tour. 31 Minutes to Takeoff is in stores now, and the “Bow Chicka Wow Wow” remix featuring Lil Wayne can be purchased on iTunes… even if you’ve smashed your iPod.