Just because Lil Jon is so drunk that he limits an interview at two questions, doesn’t mean he still can’t speak coherently about the success of his good friend and an artist that he brought into the mainstream, Pitbull.

“I believed in that dude from day one,” he said after his DJ set at Mohegan Sun’s Ultra 88 Nightclub in Uncasville, CT. “That’s why I f–ked with him, because he had a lot of talent. I saw potential that he could do something that nobody had ever done before.”

That “day one” that “The King of Crunk” referred to took place in Miami. Pitbull was once “Mr. 305” (a Miami area code). Now the rapper is the self-proclaimed “Mr. Worldwide,” and Jon doesn’t find that a stretch the least bit.

“He’s just killin’ it, like this new record he’s got with Ne-Yo (‘Give Me Everything’) is going to be a number one, worldwide smash,” the “Celebrity Apprentice” star predicted. “He’s amazing. I got a lot of respect for him because if you interview him, he’ll tell you he learned a lot from me, he learned a lot from (Dr.) Luke. To be a good artist, and a good entrepreneur and entertainer, you have to listen to other people and watch and learn. That’s what he did.” 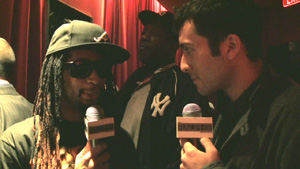 Like any good teacher, Jon practices what he preaches: for most of the night at Ultra 88, the DJ played up-tempo pop and dance remixes, despite some of his most popular hits falling in the hip hop genre.

“I’m in a dance world,” he admitted. “I DJ raves and sh-t all the time, so yeah I do a lot of different stuff.”

Heck, he even grants interviews after a night of DJ-ing and drinking. Unfortunately, he was serious about that whole two question thing.