John Mayer gave a performance almost two years in the making on Wednesday night, and it was all for a charitable cause. 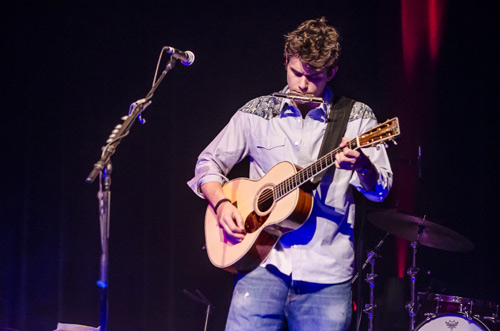 The singer/songwriter took the stage at “The Livingston Town Proper: A Concert to Benefit the Fighters of the Pine Creek Fire,” a benefit held in downtown Bozeman, Mont., where Mayer recently purchased a home. The fundraiser brought in over $100,000. Monies raised will benefit firefighters and first responders who battled a blaze last summer which destroyed more than 8,500 acres of forest in and around Livingston.

Mayer performed four tracks, three off his last release Born and Raised and “Who Says” from the 2009 album Battle Studies. In the latter, he made a reference to girlfriend Katy Perry, who was reportedly in the crowd.

The four song-set is Mayer’s first public performance since April of 2011, and one which has his label Columbia Records quite encouraged. In September ‘11, Mayer announced on his blog that a granuloma was discovered on his vocal cord. The condition required both surgery and vocal rest, and delayed the release of Born and Raised from October of that year to the following May. However in March, the granuloma returned, forcing Mayer to cancel the tour he had already announced in support of his album. He underwent a second procedure and further vocal rest, completely ceasing to talk for an entire month.

A representative for Columbia said while Mayer did not contact it to organize the benefit, the label is fairly certain he did receive a green light from his doctor before proceeding. The rep went on to characterize Columbia’s oversight of the situation as a “day-to-day” process, and that there was no timeline in place for new tour dates or music for Mayer.

But that doesn’t mean the guitarist isn’t returning to the stage anytime soon. On Thursday, the New Orleans Jazz Festival announced its lineup, with Mayer slotted to perform on April 26.