She is no stranger to entertaining millions, whether it is on “TODAY” with Kathie Lee Gifford and a glass of wine or while jamming out to “Uptown Funk” on “Lip Sync Battle.” But on June 18 Hoda Kotb will focus on a small, figuratively and literally, portion of her audience. The TV host is one of a handful of celebrity mentors for the annual Garden of Dreams Talent Show at Radio City Music Hall.

“When I was younger, you come and you walk by Radio City and you look up and you go, ‘Oh my God, it’s Radio City,” recalled Kotb to “Ralphie Tonight” before a rehearsal for the performance. “And then you see The Rockettes, and you see the rest of it… I just think that there’s something about this place.

“But more than that, a lot of great things happen in great buildings and great stages. These kids, who have overcome all kinds of tough things in their life, are standing proud, singing out and it just turns me on.” 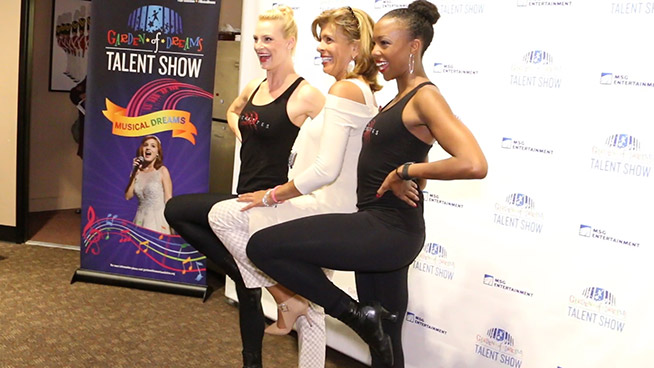 The Garden of Dreams Foundation works with The Madison Square Garden Company to bring once-in-a-life time opportunities like the talent show to children facing obstacles. Joining Kotb to mentor the kids will be model and dancer Damaris Lewis, New York Liberty Forward Essence Carson, The Rockettes, Broadway performer Chrisitna Sajous and Jarod Grimes, who stars in the “New York Spring Specatcular.” The group brings a diversified skill set to the table; however Kotb believes that despite this being a talent show, it is not their talent per se that will takes these participants to the stage at Radio City and beyond.

“I don’t think the successful people are necessarily the most talented or the most educated, or any of those things because I wasn’t either,” the TV personality opined. “I think it’s really the kids who don’t stop. If you have a will and you love it, I think that’s three-fourths of it. Talent doesn’t win. Persistence wins. Perseverance wins.”