INTERVIEW: It Keeps Getting Busier, and Better, for Hot Chelle Rae

“It’s everything that we thought it would be, but it’s also surprising at the same time,” lead singer Ryan Follese told me backstage over the weekend. Hot Chelle Rae was on one of its many sold out stops for the “Beautiful Freaks” tour. “To be able to have this job and have it take us to the places we’re going, it’s incredible.”

Case in point: the band recently wrapped a tour through Australia and New Zealand supporting fellow Nashville musician Taylor Swift. Follese said the band and Swift simply had one of “those moments.”

“We were on this boat with Taylor, and we were all just sitting there, trolling about in Sydney Harbor,” the front man recalled. “I was actually standing next to Taylor, and I was like, ‘This job is amazing.’”

“As big as she is, she knows too,” Follese said. “The fans are unreal. This whole thing is just incredible.”

But the fans overseas didn’t just make HCR feel welcome by acting as tour guides during the day, or using “please” and “thank you” when asking for photos.

“They knew every word to every song, not just the singles,” Overstreet said. “It gives us a validation of songs we wrote that haven’t been on the radio yet, and to see them fall in love with those is really cool.”

Hot Chelle Rae has charted two tracks from Whatever on pop radio, and a third could be on the way with “Honestly,” a break-up anthem with a music video that features “Pretty Little Liars” star Ashley Benson.

“I think somebody from a show like that is always a really cool edge to add to the video,” Follese said of Benson’s role as his eventual ex-girlfriend. “We reached out to her and she was down to do it.”

Of course, it wasn’t that simple. The actress was getting ready to shoot a movie, and HCR was on tour. All parties involved found one 24 hour window to film. The final piece took 17 hours. Benson left after for her movie; Hot Chelle Rae flew to Australia the next day.

In the end, the guys found a way to make it work. You can’t be surprised at that. 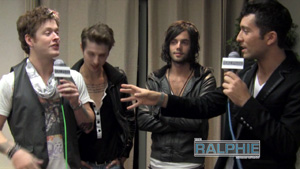