INTERVIEW: Seinfeld Jokes New Residency ‘Could Be A Huge Mistake!’

When Jerry Seinfeld plays venues like the F.M. Kirby Center in Wilkes Barre, PA, there is at least one problem he doesn’t have to worry about: friends and family asking for comp tickets.

That probably will not hold true as Seinfeld begins a residency, the first of his career, just blocks from his New York City apartment at the historic Beacon Theatre. The comedian will begin calling the Upper West Side venue his home minutes away from home starting January 7, with monthly gigs scheduled through the end of the year and planned for as long as the interest from both Seinfeld and the public holds. The exception is November, with no shows booked; there are two in October to make-up the lost date.

So why did Seinfeld, who is seemingly enjoying a semi-retirement of performing his stand-up routine across the country and filming the web series, “Comedians In Cars Getting Coffee,” want to do this? Beacon Theatre is managed by the Madison Square Garden Company, which hosts another iconic New Yorker every month at its main venue.

“When Billy Joel does ‘New York State Of Mind’ at The Garden, it’s different,” explained Seinfeld about seeing the Piano Man inside the World’s Most Famous Arena. “It sounds different; it feels different than when he does it in Charlotte.”

Seinfeld said during a press conference announcing the residency that the experience inspired him to reach out to James Dolan, Executive Chairman of MSG.

“Yes!” Dolan replied when I asked what his initial reaction to Seinfeld’s idea was. “Jerry Seinfeld wants to do anything with us, the answer is always ‘yes.’

“I’m not surprised,” Dolan later told me. “He’s all about New York, and obviously so is Billy. So it just makes perfect sense.”

Seinfeld even bought Joel’s Long Island home from him and joked during the media gathering that he was out to “sabotage” his career. All jokes aside, Dolan clearly views the two acts in a class of their own.

“It’s hard to say,” responded the executive when I inquired about residencies being a new trend for venues and live events. “Billy Joel and Jerry are both special and it’s not like any comedian could do this or any entertainer like Billy Joel could do this. There is a matchup between them, New York and the marketplace.”

Dolan also noted that his favorite “Seinfeld” character was the Soup Nazi, which didn’t seem to surprise the show’s star.

“Oh that’s funny,” Seinfeld said. “I get that. The Soup Nazi is all business, so is Jim.”

The comedian hasn’t had much of a “routine” from a professional perspective since the show ended, and his new gig really doesn’t alter that.

“There’s no specific day or week,” he explained regarding the schedule. “It’s just; if they have an open night and I’m free, we’re just going to do it like that.”

Tickets range in face value from $79 to $175 but good luck grabbing a seat at that; all shows for 2016 are already sold out. So what is Seinfeld going to do when friends start calling for comps?

“I’m not prepared at all,” he told me. “And, I don’t really know how I’m going to handle it. I think I may just lose some friends. 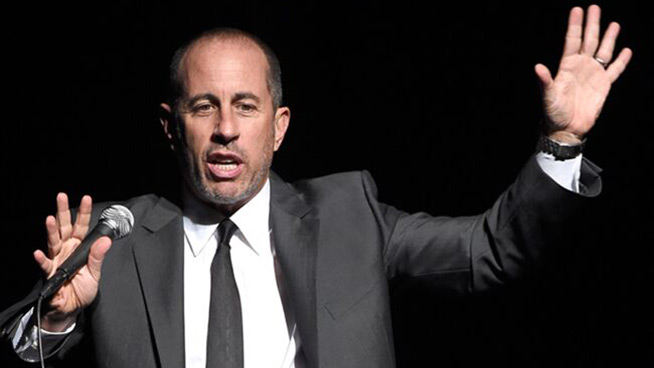 “The New York Spring Spectacular” held its Opening Night at Radio City Music Hall on Thursday (3/26). The production stars Derek Hough, Laura Benanti and The Radio City Rockettes. A number of celebrities from music, movies, sports and modeling came out to see the show, and chatted with “Ralphie Tonight” on the Red Carpet.

Tickets for the seven-week engagement, which runs through May 3, are on sale now.