I am fortunate in that I have the opportunity to witness and/or experience a lot of cool moments due to my line of work. However, one moment sticks out from the rest, and it took place a few weeks ago at the Billboard Music Awards.

The fact that this happened weeks ago and I still feel compelled to write about it should speak to the magnitude in which it impacted me, and I hope you’ll feel the same way.

A quick preface: red carpets are not all that they are cracked up to be. Chances are you’ve watched an award show special on a network like E! and you’re used to a well-orchestrated production where all of the big stars stop to talk to the media and everyone looks flawless.

Like most pictures that entertainment media paints, that is a false one. The carpets are usually high on humidity, low on space and short with A-list celebrities actually talking to reporters.

It made a moment I witnessed at the Billboard Music Awards red carpet that much more poignant.

So of course, Ludacris and Ciara co-hosted this year’s BBMAs. I thought they did a spectacular job but full disclosure; I’m biased because I like them and really enjoy covering the show. Anyways Ciara had her fiancé, Seattle Seahawks quarterback Russell Wilson in tow throughout most of the evening and of course on the carpet, where the two posed for photos together. 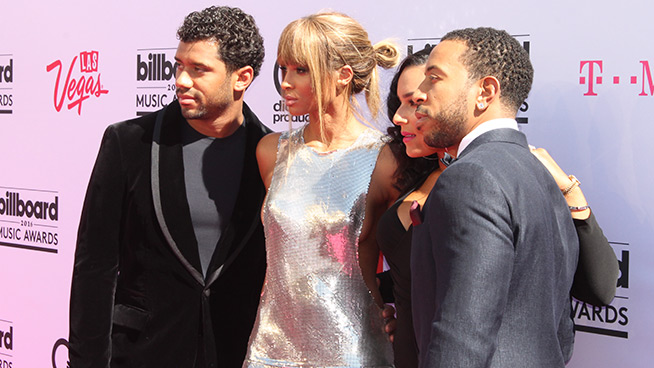 From the jump, you know Wilson as a class act: plays the game in an admirable manner, always says the right thing and has an image so squeaky clean Nickelodeon asked him to host the Kids Choice Sports Awards for a second consecutive year.

And even on the carpet, he turned down an interview request from me (Keep in mind I was covering the show for the Cumulus Media owned Westwood One, the official radio network of the NFL) because he wanted to simply support his fiancé, not bask in the spotlight.

Ironically I asked him for a few words while Ciara was on the E! platform speaking with Jason Kennedy. The network’s location was right next to a fan zone which also happened to be the area I was stationed in. This wasn’t my first run-in with fan zones on carpets: typically the people in the zones are friends of sponsors, seat fillers or contest winners and they’re all very happy to be there. They are also very inquisitive as to what is happening around them and why you’re holding a microphone.

Now the fans were busting my stones a bit because I didn’t know the name of every single person walking the carpet. But when I shot back, “Wait, didn’t you guys see Russell Wilson with Ciara?” they immediately ceased the stone-busting. A Super Bowl winning quarterback had walked right by and they didn’t even notice.

Matter-of-fact, he was still within earshot… and getting a good laugh over this exchange.

That’s when a father, who I think was working security, emerged from the crowd with his son who might have been 12 or 13. The kid played little league football… QB to be exact. 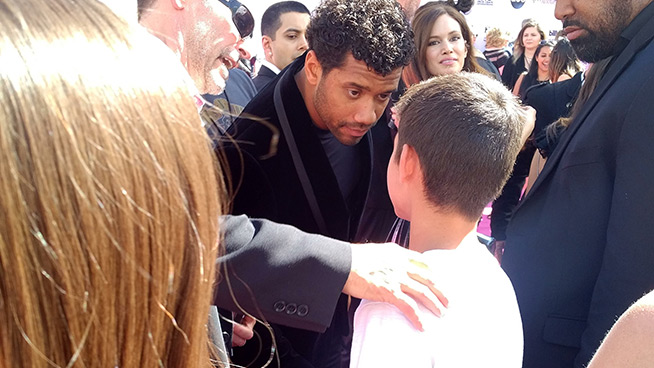 The father politely introduced Wilson to his son, and then the two started talking shop. I didn’t want to ease drop too much (I also had to keep an eye out for other celebrities) but the chat lasted a few minutes.

When it ended, Wilson tells the kid, “Hey man, good luck. See you in the NFL one day.”

Could you imagine hearing those words of encouragement from a Super Bowl winning QB? That one statement could be life altering; the type of thing they talk about incessantly on FOX when that kid does make the NFL.

I’ll tell you one thing I can’t imagine: a moment like that happening without prompting on a red carpet. It’s a story I wouldn’t believe had I not been fortunate enough to witness it myself.