Archives For the script

If you have ever listened to The Script, you know the Irish rockers know a thing or two about heartbreak. Perhaps this serves as an explanation as to why the band moved up a December date on Long Island to this Thursday. The concert at Huntington’s Paramount Theater will now serve as a benefit for Hurricane Sandy victims.

“I believe that a lot of these songs are going to take on a very, very special and a very unique meaning when we get to sing them in front of the audience there,” said Script lead singer Danny O’Donoghue on “The Ralphie Show.” The show’s flagship station, 95.5 PLJ, is one of the radio sponsors of the benefit show. “One song that comes to mind is ‘For the First Time.’”

O’Donoghue is well-aware that for many on Long Island and down the shore, life is imitating the lyrics of his art.

“People are having dinner by candlelight, yunno they might have an old, cheap bottle of wine there and they’re really back to basics,” the singer said. “That song, I mean on that night is gonna… I’m getting hairs on the back of my neck standing up now imaging the crowd singing it.”

There will be tears of joy as well – The Script’s latest hit single came about because O’Donoghue and his fellow coach on UK’s “The Voice” Will.I.Am both enjoy finding “positivity through music.”

“I guess we’re both individually strange and unique as the next one,” the Irishman said of his friendship with the Black Eyed Peas emcee. “God, I forgot about that song. I’m going to play that song too… that’s going to be amazing.”

The concert begins at 8 PM on Thursday. All proceeds benefit Long Island Cares and the Long Island chapter of the American Red Cross.

The Script lead singer Danny O’Donoghue and Black Eyed Peas lead emcee Will.I.Am linked up as coaches of UK’s “The Voice.” The two joined forces in the studio for this track, which serves as the lead single from the Irish-rockers’ forthcoming third album.

Gavin DeGraw has found living a “normal” life has afforded him more experiences to write songs from, something he says will be apparent when Sweeter is released on September 20. However, attempting to live like everyone else may have lead to an alleged incident on Monday morning, in which the singer was brutally beaten by a group of men.

“When someone says, ‘Oh well maybe you’re not on tour for a year or so, you’re in New York hanging out, watching bands and things like that,’ that’s so important to me as a writer,” DeGraw shared with me on his tour bus Saturday afternoon. “That’s my real life; otherwise I’d just be sitting here on the bus, singing songs about traveling all the time.”

But don’t let him mislead you: DeGraw is doing his fair share of traveling. He played a show in Camden, NJ with Maroon 5 and Train on Friday night. The next evening, DeGraw departed from the tour to headline a small show just outside of Scranton, PA. Sunday night, the “I Don’t Wanna Be” singer rejoined with M5 and Train for a date at the MGM Grand at Foxwoods in Mashantucket, CT.

DeGraw, a Manhattan resident, returned home Sunday evening. According to a report in the New York Post, he was assaulted around 4 in the morning, after leaving some friends at a bar. The singer suffered a broken nose and facial cuts before stumbling 13 blocks. Still dazed, a cab struck an injured DeGraw as he was trying to flee. He eventually made it to Bellevue Hospital, where a rep for the artist told TMZ, who broke the story, that DeGraw is stabilized and under doctors’ supervision.

Almost two days prior, DeGraw was all smiles on his tour bus in Jermyn, PA. The stop was one of just a handful of headlining shows for the Upstate New York-born singer. Perhaps it was growing up in South Fallsburg, NY that kept him grounded to reality.

“There’s a different reality on the road,” said DeGraw of a singer/songwriter’s life on tour. “When you come off the road, you kinda have to come off the road and just be normal, and then go, ‘Whoa, something very f’ed up happened to me today,’ and other people are like, ‘What do you think we all go through man?’”

Unfortunately for DeGraw, that “f’ed up” thing happened Monday morning, and proved another perception of a musician’s life incorrect.

“It’s funny talking with musicians about their schedule, and then you talk to someone who has a real job, and they’re like, ‘That’s your schedule? I wish I had that schedule.’”

Tonight, the only thing being wished upon is prayers for DeGraw and his family, as he recovers. The pop star was previously scheduled to rejoin Maroon 5 and Train Tuesday evening in Saratoga Springs, NY, and was slated to perform on “Live! With Regis and Kelly” Wednesday morning. As of press time, there was no word from J Records on the cancellation or rescheduling of either appearance.

And with that, another song about heartbreak and alcohol… hey, can’t say that they don’t relate to people!

Dublin, Ireland’s The Script says to “The Ralphie Radio Show” that on St. Patrick’s Day – anyone can be Irish. The guys also talk about their favorite ways to celebrate the Irish holiday. 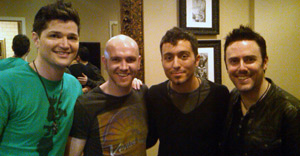 DAILY DOWNLOAD: The Script – The Man Who Can’t Be Moved