TMZ’s Nicki Fertile chats about the 180 that UFC fighter Tito Ortiz and his baby mama, former adult film star Jenna Jameson, pulled on the allegations that they were hurling back and forth at each other. 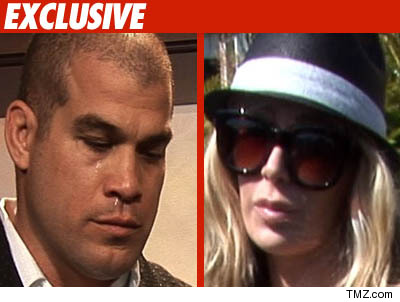 EXCLUSIVE: Quite A Mandy; Mandy Moore Does It All

Mandy Moore is quite the renaissance woman. From music to movies, commercials to cartoons, she can be seen or heard in everything from The Simpsons to motion picture films. So, when someone approaches Moore, what do they recognize her from?

“A lot of times, people will come up and say hi because of that TV show, Entourage,” said Moore. “And before that, it was that show Punk’d. That was sort of my claim to fame for a couple of years.”

Probably the only place Moore isn’t recognized from yet is sitting ringside at UFC fights. Yup, Moore is quite the mixed martial arts fan, although don’t expect to add “UFC Fighter” to her laundry list of titles.

“I’m a fan, I love to observe from the sidelines,” she revealed, adding that you won’t see her in the Octagon anytime soon.

Moore called up The Ralphie Radio Show because she’s returned to her roots: writing and recording. The singer just released Amanda Leigh, her first LP without a major label.
—
Download the mp3

Part 2: Amanda Leigh, “I Could Break Your Heart”

—
“With this record, I guess it’s all about taking control and growing more comfortable in your own skin,” Moore said of the writing experience – she penned the entire record herself, without the input of label bigwigs and head honchos. “It’s nice to have the luxury of creative freedom now.”

The first single, “I Could Break Your Heart Any Day Of The Week” showcases a sassier side to Moore that fans of her previous releases may not be accustomed to.

“I figured it was a fun opportunity to sort of, I don’t know, play out a little bit of this edge that I guess is really missing from my reality. It’s not a proclamation I could make in real life,” she admitted.

That isn’t too hard to believe, considering the only heart we’ve known Moore to break is that of the fictional Vincent Chase. But what makes the song more of a departure is that its singer is anything but single at the moment: Moore married country star Ryan Adams a few months ago. The Walk to Remember actress insists he’s a fan of the track.

“I’m very lucky, I have a very supportive spouse in my life,” she said. “He really liked it.”

Adams proposed to Moore last February, the couple exchanged vows about a month later. Moore described her marriage to NY Magazine as “lovely.” It seems she feels the same way now… the husband and wife even follow each on Twitter, Adams is only one of two people that Moore tracks (the other is record producer Jamie Candiloro). Although she is known to keep to herself and not open up on personal issues, Moore does “tweet” quite a bit. She even taught me about blood oranges – yes, I didn’t know about them, stop rolling your eyes.

“I’m kind of juice obsessed in the morning, and I found some fresh blood orange juice. I don’t know, I thought that’d be an appropriate twitter,” she said, after explaining that blood oranges are darker and more tart than the regular variety.

Music, movies, television, voice overs… and now produce expert. Mandy Moore really can do it all.