A week before his junior high school’s festival in Edmond, OK, Greyson Chance answered a small question in a big way, and the decision has yet to cease yielding dividends. Inspired by her 2009 MTV Video Music Awards performance, the 13 year-old chose to play a rendition of Lady GaGa’s “Paparazzi” in front of his school.

“The other song that I was actually thinking about covering was a song called, ‘Fire’, by Augustana, which is actually on my physical single right now,” Chance revealed in a sit-down interview with “The Ralphie Radio Show,” which aired Monday evening.

Obviously he made the right call, and 37 million YouTube views later, Chance finds himself in a position that musicians triple his age would salivate over. The teenager is signed to Ellen DeGeneres’ eleveneleven imprint, and is co-managed by Guy Oseary (Madonna) and Troy Carter (Lady GaGa). Chance currently finds himself touring the country in support of Miranda Cosgrove. But what he doesn’t find himself doing may surprise you even more.

“I’ve actually only seen the video twice,” said Chance of the performance which sparked all of this, taped by his father back in Oklahoma. “I sometimes go back a little, but I always put it on mute. I don’t like hearing myself.”
— 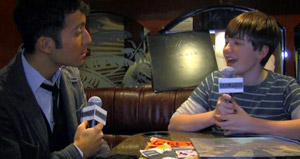 —
Chance admits that when he listens back, he begins to become too critical of his work, his manerisms… even his wardrobe. The kid is astonishing – he acts, speaks, and sings as if a 30 year-old is stuck in his 13 year-old frame. And with his talent and the all-star support group surrounding him, Greyson Chance surely will be astonishing the masses for many years to come. The singer/songwriter is working on his debut album, which he says is “about 60 percent” finished, and is due out before the end of the year. The first single, “Waiting Outside the Lines,” is available now.