The May 15, 2010 edition of the Billboard 200 featured the debut album of B.o.B atop the chart, selling over 80,000 copies. A year separated from his number one LP, B.o.B Presents: The Adventures of Bobby Ray, the Atlanta emcee still can’t believe how quickly the success came about.

“I try to stay away from a lot of stats all the time,” Bobby Ray said in an exclusive sit-down interview with “The Ralphie Radio Show.” “I don’t want to get too caught up in stats. I’d rather just play the game and look at the stats at the end of the game, but we worked hard on that album.”

The success is yielding dividends a year later, as B.o.B continues to tour the globe performing hits like “Nothin’ on You,” “Airplanes,” and “Magic.”

“You define your own success,” he said. “Just trying to get to the point where you have steady income as an artist – that takes years to get. So, that fire that keeps you (making music), that’s what creates the type of stamina that will allow you to continue to be a touring artist or whatever type of artist you want to be.”

Matter of fact, the rapper credits an artist he toured with, Atlantic Records label-mate Lupe Fiasco, as someone who helped him get to that point. 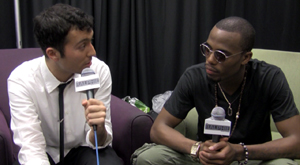 “Lupe really looked out for me in a huge way, especially at the point that I was at,” admits B.o.B, who opened for Fiasco last spring. “I remember on tour he presented me with a cake for my album release day, and he bought an album. That was a very memorable moment for me.”

But as many would later come to find out – B.o.B received more than a cake and an album purchase from Fiasco. Both “Nothin’ on You” and “Airplanes” were originally slated for Lupe’s Lasers.

“In the music industry, there are songs that float around for some years that have nothing but a hook and a beat,” he explained. “A lot of the times those are the songs that the label has as like, ‘Alright, we’re gonna push these songs (on certain artists).’ It’s almost like an outfit. As an artist, sometimes it’s frustrating because it’s like, ‘I don’t wanna wear that outfit, I wanna make my own outfit and wear it because I have a sense of style also and I’m pretty sure my fans like the type of outfits I wear.”

B.o.B was aware that Fiasco had first dibs on “Airplanes.” Judging the results, it seems the track agreed with his wardrobe in the end.

Finding common ground, while not compromising himself as an artist, is something that B.o.B continues to strive for as he creates his sophomore album.

“I feel like this is a very special project,” he said. “I feel like it’s even more special than the first album.”

Surely that is something that label executives and loyal listeners all hope they can agree on.