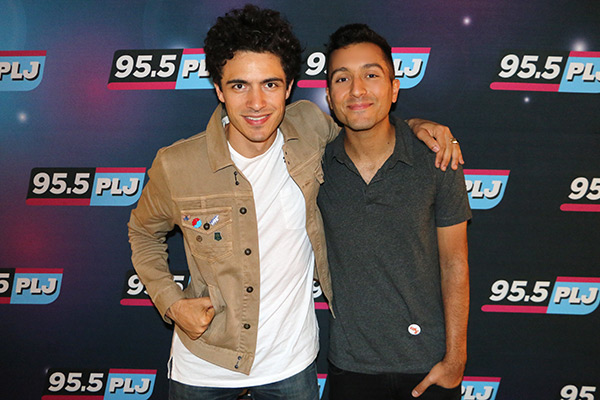 2 Slices And A Story: Marc Scibilia

This is my second-to-last “2 Slices & A Story” for season one and this episode is sentimental. I thought of the concept for this series on a random Saturday afternoon in the city over lunch with Marc Scibilia (ironically we were not eating pizza; he brought me to this great spot downtown called Cafe Habana). Marc and I were talking about each other’s respective careers and kind of going through an impromptu brainstorming session when I started hashing out the idea for something like this.

It was only a few weeks later when we filmed the first one with the great David Cook.

Of course if anyone knows pizza, it’s someone like Marc who like me, grew up in Western New York. So I’m glad that during his tour with Jon Mclaughlin he was able to swing by and tape this. 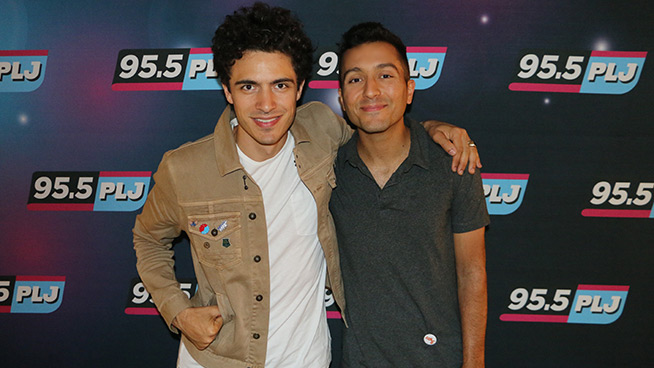 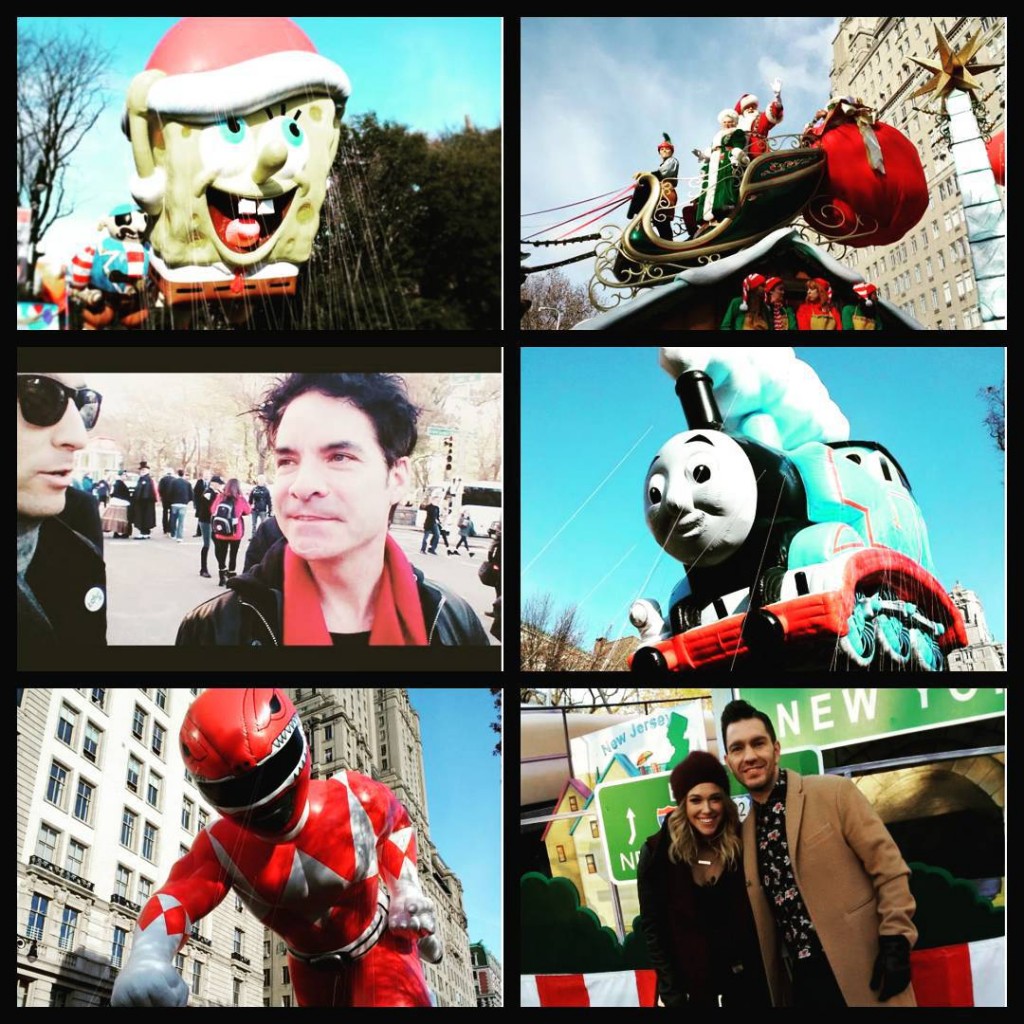 Saturday was day 2 of “Ralphie Tonight” broadcasting live from Westwood One’s “Red Carpet Radio” at the 2014 “American Music Awards” in Los Angeles. The second day of the broadcast is always the craziest but most fun because of the amount of celebrities that are in town for the event.

It was so great to see a few familiar faces like Mary Lambert, Gavin DeGraw, and Pat Monahan of Train. Also “Mr. Worldwide” – Pitbull – sat down for an exclusive interview the night before his gig hosting The AMAs!

INTERVIEW: Pat And Jimmy From Train On ‘Bulletproof Picasso’ And The San Francisco Giants

In an interview taped prior to the release of Train’s seventh studio album “Bulletproof Picasso,” Pat Monahan and Jimmy Stafford sat down in the MLB Fan Cave for MLB.com to chat with me about the band’s new music and love for San Francisco and its Giants.

The audio portion of this interview aired on “Ralphie Tonight” following the Giants’ series win over the Nationals to advance to the NLCS. To watch the interview and Train’s MLB Fan Cave Concert, click here.

INTERVIEW: Michael Franti on Touring With Train, Releasing ‘All People’

Michael Franti is known to his fan base for his philanthropy and philosophy as much as his music. Franti might be the last artist that you would think to hear shout out Jay Z and Beyonce in a song. But, the San Francisco singer does just that on the track “I’m Alive (Life Sounds Like).” The gesture took at least one fan by surprise.

“(The fan) was coming at it from this political angle,” recalled Franti during an interview that aired Monday night on “The Ralphie Show.” “I was like, ‘Should I shout out like (Vladimir) Putin and (Bashar al-) Assad?’”

Franti does not believe that name-checking the presidents of Russia and Syria would have been more appropriate. Rather, the singer attempted to use the situation to dispel a misnomer about him and his music.

“I write songs about every aspect of life,” he explained. “Politics is one of them. I care about what’s happening in the world as much as I always have. Not every day, do I wake up in the morning and turn on CNN or whatever and follow the 24 hour news cycle. I get up like everybody else. I make breakfast for my son and I get him to school and I pick him up afterwards. I want to make music that goes for people’s 24 hour life cycle, not just the 24 hour news cycle.”

Without directly addressing it, Franti perhaps also fully explained the title of his band’s latest LP, All People. The group released the album in July and promoted it while touring with Train and Gavin DeGraw. Franti has a massive amount of respect for Pat Monahan and his band, who the “Say Hey” singer first met over 15 years ago back in San Francisco. The trek was Franti’s first encounter with DeGraw.

“Gavin is an awesome guy; horrible soccer player, he’s the worst soccer player, but he’s an incredible guy,” joked Franti. “He’s pretty athletic, it’s just soccer is not one of his things.”

We’ll refrain from the puns we could drop about Gavin not being able to “Follow Thru” on the field or noting that we “Don’t Wanna Be” stuck on his team. Instead, note that Franti and Spearhead will tour up until the holidays, and are also enlisting the help of Monahan and others for a new foundation called, “Do It For The Love.” Franti and his partner Sara started the organization to help send people with advanced stages of life threatening illnesses, kids with disabilities, and wounded veterans to see some of their favorite artists live. More info is available here.

But the beloved host of “Kidd Kraddick In The Morning” died over the weekend at the age of 53. Monahan, along with his band mates Scott Underwood and Jimmy Stafford, were saddened by the news.

“Kidd has been a big supporter of Train for our whole career,” Monahan noted in an interview which aired Monday evening on “The Ralphie Show.” “He’s been in this business a lot longer than we have.”

The timing of Kraddick’s passing hurt Monahan even more.

“Any loss is sad, but to know you were moments away from seeing an old friend, and now you can’t,” the lead singer said. “Our hearts go out to his family.”

Leipsner told All Access that the band will pay tribute to Kraddick on Saturday at the Gexa Energy Pavilion. Train is currently playing outdoor venues with The Script and Gavin DeGraw in tow. Also sharing the stage with the San Francisco-based artists is country singer/songwriter Ashley Monroe. The songstress is featured on the next single from California 37, “Bruises.”

“We asked (Ashley) two years ago to sing ‘Bruises’ with us,” Monahan revealed. “We didn’t know if (95.5 PLJ) and stations like that around the United States would embrace a country artist.”

So far, so good. The “Hey, Soul Sister,” singer is pleasantly surprised.

“It’s our favorite song on the record,” he said. “The fact that people are responding to it the way that they are… it’s a great ending to this album cycle.”

With that, Monahan also breaks the news that this fourth single from the LP will likely be the last. Train’s proper tour ends in mid-August. The band will play a handful of fairs and festivals through September 1, and then gear up for the “Sail Across The Sun Cruise” next February.