Stars converged inside The Theater at Madison Square Garden for a special benefit concert honoring what would have been John Lennon’s 75th birthday. A few of the musicians participating in the event along with the evening’s host, Kevin Bacon, stopped to chat with me on the red carpet. The concert aired on AMC Saturday, December 19.

INTERVIEW: Questlove Reveals How The Roots Inspired The Start Of Good Charlotte

“Late Night” and “The Tonight Show” have elevated The Roots to a whole new level of fame, but the Philadelphia-born band has been around since 1987. Its influence reaches far beyond television. Look no further than… well, Joel and Benji Madden, the twin brothers that comprised a very popular pop rock band from Baltimore.

“We did a show once in D.C., and the cats from Good Charlotte told me the same thing, and I couldn’t believe it,” Ahmir “Questlove” Thompson told me on the red carpet of The Tony Awards earlier this month. I had just informed him that the band’s 1995 release “Do You Want More?!!!??!” inspired my camera man, Dan Mulqueen, to play drums and join a band.

“They’re like, ‘Yo dude, we saw you at the 9:30 Club and then we went home and were like, “Yo, let’s start a band,”’ Quest continued. “I’m like, ‘Wait, you’re trying to tell me, that you guys weren’t a band before seeing The Roots and you saw The Roots one night and then you decided, “We’re gonna start a band called Good Charlotte.”’”

The Madden Brothers (a name which they now also record under as a pop rock duo) confirmed this again to the drummer. While he has a hard time believing it, Quest thinks it’s both cool but a bit weird.

“Hip hop is leery to celebrate age,” he explained. “Hip hop is like the only culture in which it’s youth-obsessed.”

Jay Z is changing this in my opinion, and Quest agreed but noted he is accomplishing this by staying relevant. You could make a similar argument for Thompson, but he believes that in addition to wearing his age (43) proudly, it is his expansion outside of the genre that has afforded him the opportunity to become an elder statesman of sorts that is not looked at necessarily as elder.

“I’m working on three plays right now that will probably wind up on Broadway in 2016,” he revealed. “It’s hip hop’s turn.”

Quest told the story of how he even ended up at The Tony’s: A few weeks prior, award show host Hugh Jackman was on “The Tonight Show.” He pitched Quest on the idea that “The Music Man” was actually a hip hop play. The musician bought in to it, and agreed to help produce the rap that Jackman did during the show along side LL Cool J and T.I.

It is one of Questlove’s many skills that has come to light since Jimmy Fallon’s rise up the rankings of late night TV. And it is a ride that The Roots seem to be enjoying quite a bit.

“This is the coolest job ever,” he said simply of his position with “The Tonight Show.” We’re a bunch of 14 year-olds in the bodies of 40 year-olds.”

But it seems now, that “youth-obsessed” culture is simply looking at that age as just a number.

I caught up with celebrities arriving at Radio City Music Hall in New York for the 68th Annual Tony Awards. Check out my interviews with Questlove, Wayne Brady, Fantasia, T.I., and more below. 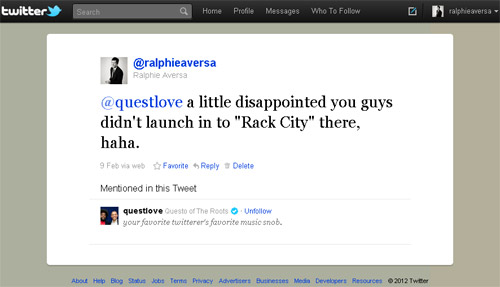 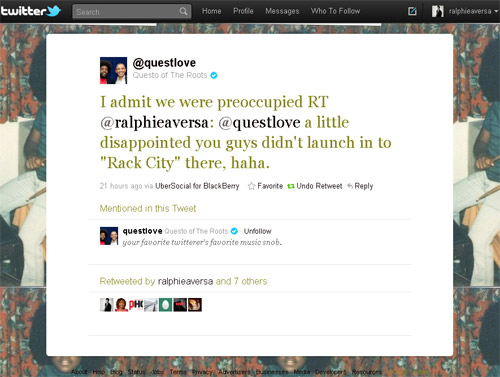 This video has gone extremely viral – a kid offering inspiration to others after learning how to ride his bicycle.

Just as much of a feel good story here: a soldier uses the Kansas City Royals to propose to his girlfriend.

And Karmin is back, this time teaming up with ?uestlove from The Roots to cover Nicki Minaj’s “Super Bass.”