In an interview taped GRAMMYs weekend at Red Carpet Radio and just airing on “Ralphie Tonight” on March 2, Camila Cabello and Dinah Jane Hansen of Fifth Harmony talk about the quintet’s new album ‘Reflection’ and their album release party in Los Angeles. 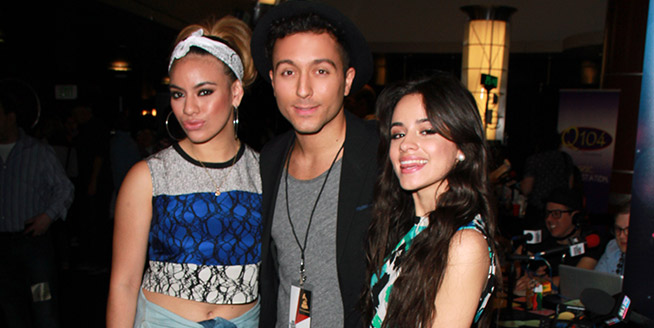 Echosmith is enjoying a great deal of success thanks to the band’s breakout hit “Cool Kids.” Sydney and Noah are two of the four siblings that comprise the group, and they recently chatted about the song as well as the follow-up single “Bright” on “Ralphie Tonight.”

Check out the deluxe edition of Talking Dreams below.

INTERVIEW: Clean Bandit On Success Of ‘Rather Be’ And Upcoming Festival Run

Jack and Luke of Clean Bandit chatted with “Ralphie Tonight” about the group’s breakout hit and plans for 2015.

He came in to “Music’s Biggest Night” with six nominations and surrounded by high expectations. In his debut GRAMMY Awards, English singer Sam Smith did not disappoint. The clear winner of the evening took home four gramophones, including two of the biggest awards for Record and Song of the Year thanks to his smash hit, “Stay With Me.”

In the press room after the telecast concluded, Smith effortlessly fielded questions from the media. It seemed as if he had to focus more on the four awards he held while he answered (“f—king heavy!” he exclaimed) than on the responses themselves.

“A boyfriend would be nice,” the artist responded when asked what could top Sunday night. Another reporter inquired what Smith is looking for in a partner. “Someone who could clean these every day for me,” he said, before looking down at his awards. The press room cracked up again.

“I do not know what I’m looking for,” he said on a more serious note. “I think the minute I start looking, it’s not going to come my way.”

In addition to winning the aforementioned categories, Smith also took home hardware for Best New Artist” and “Best Pop Vocal Album” thanks to his debut LP, In The Lonely Hour. Speaking with the press, Smith confirmed he is already working on the follow-up.

“I feel like I have a title and a concept to the record,” the UK singer noted. “I’ve already started writing. I’m living through it now. I’m trying to kiss as many people as I can so I can write some new music.”

Certainly it will be different to draw from these experiences now that Smith is an international superstar; less than a year ago he was relatively unknown in the U.S. But Smith told me one thing he’s learned in his interactions with other celebrities is that they’re all human, just exceptionally talented.

“It’s incredible,” Smith responded when I asked what it was like to have everyone from Paul McCartney to Rihanna vying for his attention on the floor at the Staples Center. “I’m a huge fan of pop culture. As a 22 year-old boy, I’ve grown up watching E! News and being obsessed with celebrity culture.”

Perhaps he didn’t need Sunday night for this, but Smith is now cemented in that culture. Naturally, he planned on celebrating his big evening by partying.

“I’m going in,” Smith said before adding, “I need to go to In-N-Out Burger though because I’ve been drinking loads of green juice recently so it’s time to ruin that.”