“Hitchcock” is essentially a movie about the making of a movie – the director Alfred’s most notable “Psycho.” But the November 2012 release focuses more on the relationship between Hitchcock and his wife, along with the lead actress of the film, Janet Leigh. Scarlett Johansson plays the actress, who it was rumored that Hitchcock flirted with, amongst perhaps other leading ladies he worked with.

This sounds like a storyline that the modern-day, 24/7 media would eat up to the very last tweet. But Johansson doesn’t believe that Leigh would have been covered much differently in 2012 than she was in 1960.

Credit: Video Courtesy of Shaina Moskowitz
“She had her own challenges,” Johansson told me on the red carpet of the “Hitchcock” movie premiere at New York’s Ziegfeld Theatre. “She had a very public divorce; she lived a very public life.”

Still, Johansson thinks the only thing we would have more of is “pictures of her with her kids going to the grocery store.”
—
Plenty of photos are taken of Johansson and other leading ladies in Hollywood – like her co-star Jessica Biel. The newly-married Mrs. Timberlake was recently photographed with husband Justin and producer Timbaland in The Rockaways, handing out supplies to those affected by Hurricane Sandy. 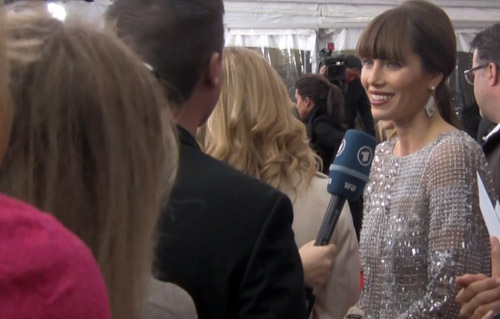 “It was incredibly amazing and fulfilling,” Biel told me of the experience. “Everyone has to be a part of that community and give back, so it was incredible.”