INTERVIEW: Julia Michaels On BBMA Nominations And Writing For Bieber

She started her career by teaming up with Semi Precious Weapons lead singer Justin Tranter and writing big hits for Justin Bieber, Selena Gomez and Hailee Steinfeld to name a few. But since deciding to keep the song “Issues” for herself and become an artist, Julia Michaels has gotten to experience a whole new side of the music industry.

On Monday morning, she had the chance to check another box off the list: live TV. Michaels’ first time in front of the camera without the safety net of a pre-tape came on ABC’s “Good Morning America.” She and Fall Out Boy’s Pete Wentz revealed nominations for the 2017 Billboard Music Awards.

“A little nerve-wracking, I’m not going to lie,” Michaels told me of the experience backstage at GMA’s Times Square studios. “I have really bad performance anxiety. Apparently I can’t even talk without getting nervous!”

Michaels was thankful to have Wentz there though, a seasoned-pro at these things, to help her along. Despite Tranter penning FOB’s “Centuries,” it was the first time the two artists had met. 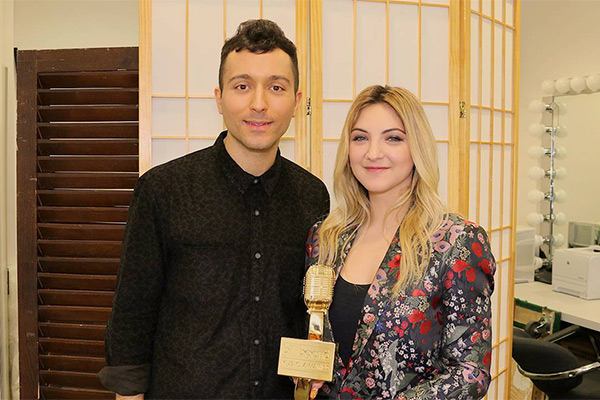 Speaking of the nominations, The Chainsmokers and Drake took home the most, ever. Both acts tied the single-show nod record at 22 apiece. Twenty One Pilots checked in next on the list with 17, followed by Rihanna’s 14.

As for the aforementioned Bieber, he grabbed 7 – an impressive number considering the “Purpose” album cycle is finished. Michaels contributed to that LP; most notably co-writing “Sorry.”

“It was awesome,” Michaels said of her experience working on the album. “Actually, one of my favorite songs that I’ve written is a song called ‘The Feeling.’

Immediately, the light bulb went off for Michaels. The song was co-produced by Skrillex and features singer Halsey, who coincidentally also scored 7 BBMA nods.

As for Michaels’ solo project, the singer is still pretty happy she made the decision to release the super-personal song “Issues” with her own voice. Michaels recently released the music video for the single and tells me that while originally thinking it would be followed by an EP, she may now opt for a full-length album because of the amount of writing she has done.

And yes, she’ll be at the 2017 Billboard Music Awards, which air Sunday night, May 21 at 8 pm live from T-Mobile Arena in Las Vegas.